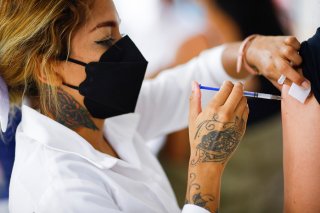 Pfizer’s coronavirus vaccine became the first to receive the full approval of the Food and Drug Administration (FDA) for all Americans ages sixteen or older on Monday.

On that same day, vaccine mandates were approved in New York and New Jersey, stating that schools and certain businesses were required to vaccinate their attendees. In New York, Mayor Bill de Blasio (D) announced that school staff was required to have received at least one dose of the vaccine by September 27 in order to continue working. De Blasio conspicuously carved out a “testing alternative,” which many locales have, allowing staff to forego vaccination if they take frequent coronavirus tests. The city’s teachers’ union is reportedly planning to sue the city over the mandate.

At the same time, New Jersey Gov. Phil Murphy (D) announced that vaccinations would be required by October 18, although a testing alternative was provided. Terry McAuliffe, the former governor of Virginia, publicly endorsed the vaccine and recommended that all public-sector employees receive the shot, although Gov. Ralph Northam (D) has not required it.

The Defense Department announced on Monday that vaccines would be mandatory for all service members, although it did not provide a timetable for when this would be accomplished. Several private companies, such as Chevron and United Airlines, have also mandated vaccines for some or all of their workers.

While there exists a legal precedent for vaccine mandates—a 1905 Supreme Court case, Jacobson v. Massachusetts, which upheld states’ authority to mandate the smallpox vaccine—and private companies are generally free to set their own policies regarding vaccines, legal experts have warned that the case for sweeping mandatory vaccinations on public-sector employees is shaky. In particular, vaccine opponents have focused on the First Amendment, which in some cases can allow vaccine exemptions on the basis of religious practice, and the Due Process clause, which can be interpreted as allowing one to refuse to put substances to put in one’s body without due process of law.

Before they received FDA approval on Monday, the vaccines used in the United States were approved only under “Emergency Use Authorization,” a caveat that led some vaccine skeptics to oppose the inoculations on the basis that the FDA had not fully approved it. After Pfizer presented data showing that the drug had a 91 percent success rate at preventing the disease, it was approved.

For children between the ages of twelve and sixteen, the drug remains under Emergency Use Authorization only. Although these groups are exceptionally unlikely to develop serious coronavirus complications, there are fears that children could spread the virus to their parents.