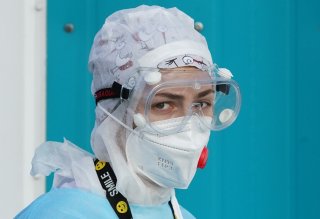 A new coronavirus descendant that is related to the Delta variant—also known as Delta plus or formally AY.4.2—may spread more easily than the regular Delta strain, according to experts in the United Kingdom.

To reflect this potential risk, the U.K. Health Security Agency (UKHSA) has moved the strain up into the “variant under investigation” category.

“This sub-lineage has become increasingly common in the UK in recent months, and there is some early evidence that it may have an increased growth rate in the U.K. compared to Delta,” the UKHSA said in a statement.

The latest official data indicate that AY.4.2 makes up about six percent of all cases in the country that have been genetically sequenced.

“The public health advice is the same for all current variants. Get vaccinated and, for those eligible, come forward for your third or booster dose as appropriate as soon as you are called,” said Dr. Jenny Harries, the CEO of UKHSA, per BBC News.

“Continue to exercise caution. Wear a mask in crowded spaces and, when meeting people indoors, open windows and doors to ventilate the room. If you have symptoms take a PCR test and isolate at home until you receive a negative result,” she added.

Subvariant in the United States

Meanwhile, in the United States, the subvariant has been detected in several states but there hasn’t been a large uptick in such cases nationwide.

“We particularly monitor for sublineages that could impact therapeutics, such as monoclonal antibodies and vaccines,” Dr. Rochelle Walensky, the director of the U.S. Centers for Disease Control and Prevention, noted during a recent White House COVID briefing.

“At this time, there is no evidence that the sublineage AY.4.2 impacts the effectiveness of our current vaccines or therapeutics,” she continued.

However, according to CNBC, Delta plus could eventually affect the age groups that are eligible to receive booster shots.

“The exact age of that will be based on what we see of the emerging situation, which is quite dynamic right now because we continue to see reports of new variants coming up,” said Dr. Peter Marks, the Food and Drug Administration’s lead vaccine regulator.

“And we’re also seeing changes in the epidemiology of COVID-19 in our country right now with new hotspots coming up even as certain places die down,” he added.

Back in August, during an interview with McClatchy, White House chief medical advisor Dr. Anthony Fauci warned that an even more severe variant or subvariant could eventually emerge.

“If we don’t crush the outbreak to the point of getting the overwhelming proportion of the population vaccinated, then what will happen is the virus will continue to smolder through the fall into the winter,” said the director of the National Institute of Allergy and Infectious Diseases.

“We’re very fortunate that that’s the case. There could be a variant that’s lingering out there that can push aside Delta. If another one comes along that has an equally high capability of transmitting but also is much more severe, then we could really be in trouble,” he added.