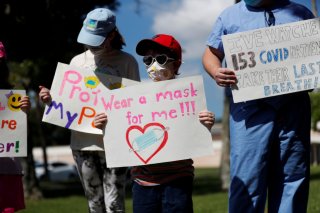 The United States has faced an increased load of COVID-19 cases as the summer has progressed, owing mostly to the prevalence of the highly infectious Delta variant. To date, more than 600,000 Americans have died from the virus, out of 4.3 million deaths worldwide.

While the vaccination program in the United States, which the Biden administration regards as essential for fighting against the spread of the disease, was initially very successful in its rollout, the number of Americans receiving new vaccine shots has trended steadily downward over the summer, at the same time that cases have increased. So far, around fifty-eight percent of the vaccine-eligible population, including all Americans aged twelve and up, are fully vaccinated against the virus.

One telling statistic has been the increasingly divergent new case rate between states that have actively pushed for strict COVID-19 lockdown measures, such as mask mandates and restrictions on unvaccinated Americans, and states that have actively discouraged these measures, such as South Dakota, Texas, and Florida. All three state governments have strongly opposed allowing local authorities to enforce mask mandates, which the Centers for Disease Control and Prevention (CDC) have argued can significantly decrease the transmission of the virus.

The result has been that California, which reintroduced coronavirus lockdowns only a month after lifting them in June, has reported 141.1 new COVID-19 cases per 100,000 residents over the last week—only half of Texas’s transmission rate, at 297.8 cases, and less than one-fourth of Florida’s, at 653.8.

Florida has been hit particularly hard by the virus. Its hospital admission rate, formerly around 1,100 cases per day in January, has now increased to more than 2,000. By comparison, Texas’s daily rate is 1,403, and California’s is 772.

The White House highlighted that Florida had more COVID-19 cases than the thirty states reporting the lowest new case rates. Much of this discrepancy comes from Florida’s relatively high population, although its per capita infection rate is still one of the highest in the United States.

California’s lower rate is mostly explained by the enforcement of its health and safety guidelines by Sacramento, and by the mask mandates in California’s most populated areas, including Los Angeles County. Furthermore, more than three-fourths of eligible Californians have been vaccinated, compared to 57 percent in Florida and 53.7 percent in Texas.