Want to Get the Economy Going and Fight Coronavirus? Mandate Masks. 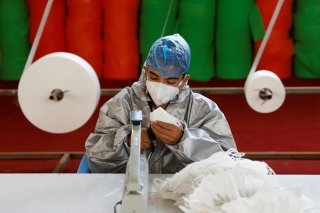 I recently ran across a 2010 talk given by neuroscientist and New York Times bestselling author Dave Eagleman to The Long Now Foundation. Provocatively titled “Six Easy Steps to Avert the Collapse of Civilization,” Eagleman presented what he viewed as the six requirements for a durable civilization. Among them: “Don’t lose things” such as knowledge. Both plumbing and inoculation were invented and then lost for a long time before being rediscovered. Another one: “Get more brains involved in solving problems” such as by crowdsourcing problems. Or, as I see it, by making sure as many people as possible globally have internet access.

But Eagleman’s first tip is probably the most relevant at the moment: “Try not to cough on one another.” Of course, this can be accomplished during a pandemic by working at home and through various telepresence options such as a Zoom call with a doctor.

Also, you can wear a mask. And if the econ team at Goldman Sachs is anywhere close to being right, mask-wearing is a tremendous pro-growth economic policy with a tremendous return on investment. From “Face Masks and GDP,” a new GS note:

The sharp increase in confirmed coronavirus cases in the US Sun Belt has led investors to worry about renewed broad lockdowns with large negative effects on GDP. But there are also other ways to reduce infections, including stringent bans on large gatherings and greater use of face masks. In particular, we argue that a national face mask mandate could partially substitute for renewed lockdowns. We start by showing that a national mandate would likely increase face mask usage meaningfully, especially in states such as Florida and Texas where masks remain largely voluntary to date. … We find that face masks are associated with significantly better coronavirus outcomes. … Our baseline estimate is that a national mandate could raise the percentage of people who wear masks by 15pp and cut the daily growth rate of confirmed cases by 1.0pp to 0.6%. Finally, we translate our results into GDP terms by asking how much our Effective Lockdown Index (ELI) would need to increase in order to cut infections by as much as a national mask mandate, and then converting the ELI impact into a GDP impact using the estimated cross-country relationship between the two. These calculations imply that a face mask mandate could potentially substitute for lockdowns that would otherwise subtract nearly 5% from GDP.

A pretty good bargain, then. Avoiding a trillion-dollar GDP subtraction at the cost of $59 million to $1 billion for 325 million N95 masks (as tweeted by Cornerstone Marco policy analyst Donald Schneider).

This article by James Pethokoukis first appeared in AEIdeas on June 30, 2020.