Dr. Gottlieb: My Kids Will Get Coronavirus Vaccine 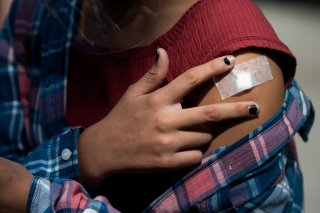 Dr. Scott Gottlieb, the former commissioner of the U.S. Food and Drug Administration (FDA), has asserted that he has no issues with giving coronavirus vaccine doses to his children “as soon as they’re eligible.”

“My kids are becoming eligible for vaccination, and I’ll get them vaccinated as soon as they’re eligible. I have confidence in the vaccine,” Gottlieb, a physician who worked at the FDA under former Presidents Donald Trump and George W. Bush and now serves on the board of COVID vaccine maker Pfizer, told CNBC’s Squawk Box on Monday.

“I think it’s going to be liberating for their lives,” he continued.

Recent data from Pfizer have indicated that the two-shot vaccine regimen in smaller doses was found to be 90.7 percent effective in preventing symptomatic illness in children ages five to eleven. Last May, the U.S. Centers for Disease Control and Prevention approved the Pfizer vaccine for children ages twelve to fifteen.

But even with the expected eventual approval of the vaccine, Gottlieb noted that he doesn’t think widespread vaccine mandates at schools will become the norm.

“I just don’t see mandates being a prominent feature in how this vaccine is distributed for a long time,” he said.

Throughout the ongoing pandemic, coronavirus has been found to be less deadly in children and young adults, but the death toll for that age group is still elevated.

“We’ve seen six hundred ninety deaths in children under the age of eighteen and one hundred fifteen kids ages five to eleven” since the start of the pandemic, Gottlieb claimed.

“Just to put that into perspective, before we had a vaccine for chickenpox, we would lose about ninety kids a year,” he continued.

Gottlieb had previously contended that having vaccines become available for children is one of the keys to finally ending the current “pandemic phase.”

“On the back end of that, we’re going to have, hopefully, a vaccine available for children and, at some point before the end of the year, we probably will have the orally available drug from Merck if things go well and that undergoes a favorable review,” he said.

“I think those two things are going to be the bookend on the pandemic phase of this virus and we’re going to be entering the more endemic phase, when this becomes an omnipresent risk but don’t represent the extreme risk that it represents right now,” he added.