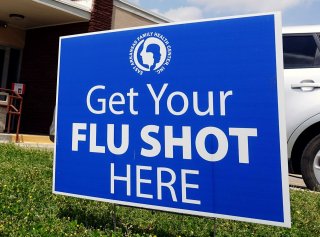 Health officials and doctors have been sounding the alarm about the fast-coming flu season, warning that a devastating one-two punch of the seasonal virus plus the pandemic has the potential to overwhelm the U.S. health-care system.

However, global efforts to stymie the further spread of the coronavirus—which include face-mask mandates, social-distancing measures and stay-at-home directives—could mean that the United States is in for a milder flu season.

“We just have no idea what’s going to happen. Are we going to get a second surge (of coronavirus)?” Dr. Peter Chai, an emergency physician at the Brigham and Women’s Hospital in Boston, told WebMD. “Hopefully, knock on wood, that won’t happen.”

Currently, Australia and other countries in the Southern Hemisphere are in the midst of the winter flu season, and the data is indicating that the overall number of flu cases there is relatively low.

Only time will tell, however, whether the United States will be as fortunate.

“There’s definitely concern about the flu overlapping with COVID,” Aubree Gordon, associate professor of epidemiology at the University of Michigan School of Public Health, told WebMD.

“We’re hoping measures for COVID will reduce flu transmission, but that obviously isn’t guaranteed. Unfortunately, the U.S. has not done a great job of keeping COVID under wraps. This could be devastating for the health-care system.”

Moreover, medical experts are still unsure whether a safe and effective coronavirus vaccine will be green-lighted by early next year.

“I think November, December, January, February are going to be tough months in this country without a vaccine,” Michael Osterholm, director of the Center for Infectious Diseases Research and Policy at the University of Minnesota, told STAT.

According to Gordon, one of the best ways to lower the overall risk this winter is to get a flu shot as soon as possible.

“People should get it as soon as it becomes available in their area,” she said. “Not only to protect their health, but also for peace of mind.”

Fewer than half of U.S. adults and about 60% of children typically get the flu shot each year, according to CDC’s 2018-2019 data. The shot’s effectiveness ranges from 20% to 60% each season—depending on the types of strains circulating.

The four manufacturers of flu vaccines have already confirmed that they will ship roughly 200 million doses across the United States this year—which is 19% higher than last season.

AstraZeneca, the maker of the FluMist nasal spray vaccine, noted that it’s ramping up production by 25% due to expected increased demand this year.