A Eurozone Economic Crisis Thanks to Coronavirus? 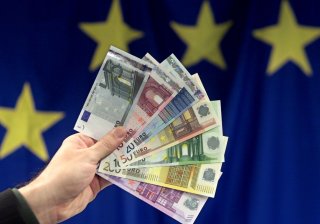 The Eurozone economy is among those economies that have suffered the most damage from the coronavirus epidemic. That has to be of real concern for the rest of the world economy. Not only might the Eurozone’s economic distress cause real trouble for world export demand. It might also have major negative spillover effects to the world financial system and to the prospects for maintaining an open international trading order.

The Eurozone economy is not just another foreign economy. With a GDP of around US$18 trillion, it is only some 10 percent smaller than that of the U.S. As such it accounts for 15 percent of the world economy and a somewhat larger share of world export demand.

One indication of the Eurozone’s current economic distress is the fact that the European Central Bank (ECB) is now projecting that the Eurozone economy will contract by between a staggering 8 and 12 percent in 2020. The ECB is expecting even larger declines in countries like Italy and Spain, which have large tourist sectors. If that were to occur, the Eurozone’s economic decline would be around three times the decline it experienced during the 2008-2009 Great Economic Recession. It would also be around one and a half times the size of the 6 percent decline expected in the US economy in 2020.

The Eurozone economy proved slow to recover following the 2008-2009 economic recession. Stuck within a Eurozone straitjacket, individual countries did not have an independent monetary or exchange rate policy to provide their economies with much-needed support. At the same time, burdened with very high public debt levels, those countries in the Eurozone’s economic periphery did not have the fiscal space to engage in budget stimulus policies. Unfortunately, it seems that these very same factors will make it difficult for the Eurozone economy to recover quickly from its current coronavirus-induced economic recession.

A prolonged period of Eurozone economic weakness will constitute a strong headwind for the rest of the world’s economic recovery. The most direct way in which it will be a drag on the world economy will be through the Eurozone’s very much lesser demand for its export goods. No longer will the rest of the world be able to compensate for domestic demand weakness by increasing its exports to the large Eurozone market.

A more troubling way in which a depressed European economy could impact the rest of the world economy is through its possible impact on the health of the world financial system. This is particularly the case considering the European banks’ very large size and the dominant role that they play in European credit intermediation.

One of the fallouts of the 2008-2009 Great Economic Recession was a spike in the European banks’ non-performing loans. With the Eurozone now expected to experience a very much deeper recession now than then, today we must expect an even more serious spike in European non-performing loans than before.

This could be particularly problematic for the Italian banks considering the expected depth of the Italian recession as well as the fact that the Italian banks’ balance sheets are already burdened with excessive holdings of Italian government bonds. One would think that the last thing that a fragile world financial system now needs would be a full-blown crisis in the US$4 trillion Italian banking system.

A prolonged period of European economic weakness could also seriously cloud the long-term world economic outlook by adding impetus to the current trend towards de-globalization. Already before the coronavirus crisis, there was considerable tension between the US and Germany on trade issues. The US has argued that Germany’s external current account surplus of almost 8 percent of GDP was excessive and that Germany was using the Euro to keep its currency artificially weak.

With the European economy now expected to perform very much worse than the US, one must expect that the ECB will keep monetary policy looser than that of the Federal Reserve. That is likely to weaken the Euro relative to the US dollar and heighten US complaints over an unduly low European currency. Similarly, weaker European growth than the US is likely to lead to a further strengthening of the European current account surplus, which will only raise US-German trade tensions. With the US already engaged in a trade war with China, one would think that the last thing that the world now needs would be a US-German trade war.

In September 2008, a bankruptcy at Lehman, a relatively small US investment bank, had major ramifications for the rest of the world economy. With that in mind, US policymakers might want to keep a close eye on the Eurozone economy. In much the same way as in 2008 a US financial market setback impacted the rest of the world economy, so too today could a major financial setback in Europe impact US financial markets for the worse.

The Economic Costs Of the Coronavirus (Billions of Dollars?)