Five Countries With the Most Coronavirus-Related Deaths 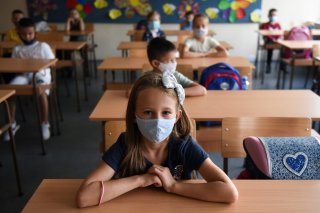 Roughly eight months into the global coronavirus pandemic, there still appears to be no end in sight.

There are now more than 25.3 million confirmed cases of the novel coronavirus worldwide, including at least 848,000 deaths, according to the latest data from Johns Hopkins University.

The United States, by far, has the most number of confirmed deaths that can be traced back to the coronavirus, but there are four other countries that are currently scrambling to contain the virus as well—so that tens of thousands of lives can be saved.

Here’s a quick snapshot of the five countries where the novel coronavirus has been the deadliest.

The United States recently passed the grim milestone of six million confirmed infections, as the number of related deaths continue to climb. Iowa, North Dakota, South Dakota, and Minnesota have recently reported record one-day increases in new cases, while Montana and Idaho are witnessing previously unseen numbers of currently hospitalized coronavirus patients. Infections have also continued on an upward trend after an annual motorcycle rally in Sturgis, South Dakota, that drew more than 365,000 people nationwide from August 7 to 16.

According to recent data from the Institute for Health Metrics and Evaluation at the University of Washington’s School of Medicine, an estimated 300,000 Americans could be dead from the novel coronavirus by December 1. The new report, however, predicts that consistent mask-wearing by 95 percent of the U.S. population has the potential to save roughly 70,000 lives.

Brazil, the world’s second worst-hit country after the United States, is the epicenter of the coronavirus outbreak in the South American region. The nation of 211 million people has seen nearly four million cases, according to the Brazilian Health Ministry. The financial center of Sao Paulo, with a population of nearly 46 million, is considered the most affected region.

Many people in Brazil have blamed the government for not doing enough to limit the virus’ spread, but Vice President Hamilton Mourao has defended its handling—and instead pointed the finger at the lack of discipline among the general public for the failure of face-mask and social-distancing measures.

The country of 1.3 billion people is fast becoming the new hotspot for the coronavirus, as it has registered more than 75,000 infections for five straight days. Just last Wednesday, India recorded 85,687 new infections—the world’s highest single-day spike since the pandemic began.

With the infection rate climbing exponentially in recent weeks, India is on track to overtake Brazil to become the second-highest in the world. The death toll, however, remains relatively low compared to its infection numbers. As of Sunday, the mortality rate was sitting at 1.79 percent, according to India’s Health Ministry.

Mexico, which saw its first confirmed infection on February 28, now has reported nearly 600,000 total cases. The government, though, has admitted in the past that the real number of infected people is likely significantly higher than the confirmed cases. More troubling is that the country has recently tacked on about 500 deaths per day.

Many of the country’s citizens are dissatisfied with the work of Hugo López-Gatell, the undersecretary of health and the most visible face in the nation’s fight against the coronavirus. At the end of April, he estimated that there would only be 6,000 to 8,000 deaths due to the virus. And in mid-June, he forecast that if public mobility was limited, Mexico would not see more than 30,000 deaths.

The United Kingdom recently surpassed 1,700 cases in a single day, the highest number since early June. Although the overall case numbers are edging up again, they are still much lower than the 5,000 new daily cases during the peak of the pandemic in April.

The country is also grappling with the potential effects of more than a million college students heading back into classrooms. The government said it is “confident that universities are well prepared for the return of students by taking measures, such as introducing social distancing on campus, limiting travel requirement for classes, and staggering teaching across extended days to reduce numbers on site.”