Flu Shot: Why Do So Many People Refuse to Get Vaccinated? 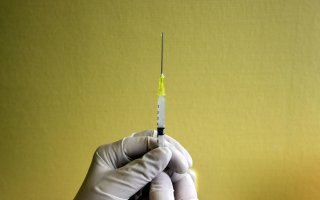 As hospitals and clinics across the country are preparing for a potentially devastating double whammy of the ongoing coronavirus pandemic and the fast-approaching flu season, medical experts are now urging all people to get the annual flu shot.

Despite the touted benefits of getting a flu shot each year, the majority of U.S. adults and about 60% of children still refuse to roll up their sleeves for one, according to the Centers for Disease Control and Prevention’s 2018-2019 data.

In the United States, on average, between nine and forty-five million Americans catch the flu each year, which leads to anywhere between 12,000 to 61,000 deaths. Between October 2019 and April 2020, CDC’s data reveal that there were an estimated thirty-nine to fifty-six million influenza infections and 24,000 to 62,000 fatalities.

Still, perhaps many don’t see the point of getting vaccinated, especially when the shot’s effectiveness only ranges from 20% to 60% each season—depending on the types of strains circulating.

The available vaccines are aimed at preventing at least three different strains of the virus, and most cover four. Last year’s formulation was estimated to be about 45% effective in preventing the flu overall, with about a 55% effectiveness in children.

In some years, “the influenza viruses used for the vaccine don't match the viruses circulating during the flu season. If this occurs, your flu shot will be less effective, but may still offer some protection,” the Mayo Clinic states.

More importantly, many have wondered whether the flu vaccine can actually give you influenza.

According to the Mayo Clinic, the answer is a definitive no. However, the vaccine does have the potential to give you flu-like symptoms—which could occur because of your reaction to the shot.

“Some people experience muscle aches and a fever for a day or two after receiving a flu vaccine,” the Mayo Clinic states. “This may be a side effect of your body’s production of protective antibodies.”

Furthermore, it often takes about two weeks for the vaccination to take effect. If you’re exposed to the influenza virus within that window, there is a chance that you could catch the flu.

Medical experts also note that most types of flu vaccines contain a tiny amount of egg protein, so if you know that you have a severe allergy to eggs, make sure you’re vaccinated in a medical setting along with a doctor who is able to recognize and manage allergic reactions.