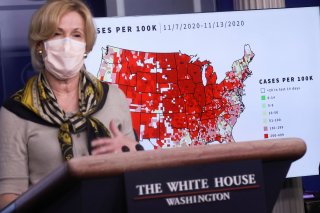 Many Americans could end up dying from the coronavirus because of the Trump administration’s refusal to engage in the presidential transition process and coordinate the vaccine’s distribution nationwide, according to a coronavirus advisor to presumptive president-elect Joe Biden.

Dr. Celine Gounder, who sits on Biden’s COVID-19 panel and is an infectious disease specialist at the New York University Grossman School of Medicine, also noted that Biden is handcuffed when trying to coordinate with federal workers on the nation’s pandemic response without a formal approval from the General Services Administration (GSA).

“The fact that the GSA has not followed through with ascertainment of the election results is really a major impediment to us because we’re not able to be on the inside of these very important discussions in terms of how these different vaccines are going to be distributed,” she said in an interview on CNBC’s Squawk on the Street on Thursday.

She added: “The longer we wait on transition, the more people will get infected and die. I think this is really a major impediment to rolling out and scaling up the vaccine.”

On Monday, Health and Human Services Secretary Alex Azar confirmed that there will be roughly forty million doses of vaccine available by the end of this year. That figure will enable the inoculation of only about twenty million people because the vaccine will require two shots.

In order to vaccinate the entire U.S. population, approximately six hundred million more doses would be needed, and public health officials and medical experts have already warned that this massive endeavor will likely take months or even more than a year.

“It’s not enough to have a safe and effective vaccine, you then need to get it into the arms of people for this to work,” Gounder said. “And the logistics of vaccinating 330 million Americans over the coming year or more is really a massive undertaking unlike anything people in this country have seen since the days of the polio vaccine.”

For White House coronavirus advisor Dr. Anthony Fauci, director of the National Institute of Allergy and Infectious Diseases, the transition period in the White House is absolutely critical in bringing the months-long pandemic down to more manageable levels.

“It’s almost like passing a baton in a race,” he said in a Sunday interview on CNN’s State of the Union. “You don’t want to stop, and then give it to somebody, you want to just essentially keep going.”

Biden told reporters on Monday that “more people may die” if the Trump administration continues to ignore the coordination efforts. On Thursday, he put the grim number at 150,000 people.

“If we have to wait until January 20 to start that planning, it puts us behind, over a month and a half,” Biden said. “And so, it’s important that it be done, that there be coordination now.”