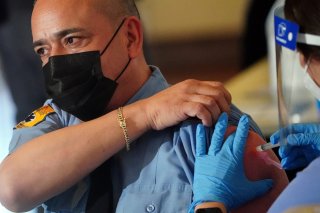 Americans shouldn’t be wasting time weighing the pros and cons of available coronavirus vaccines and should instead focus on getting inoculated as soon as possible, according to Mayo Clinic CEO Dr. Gianrico Farrugia.

“My message is very simple: Don’t wait for a particular vaccine,” he said Tuesday in an interview on CNBC. “Get the first vaccine that is offered because their benefits far outweigh any potential risk.”

Currently, only two coronavirus vaccines—one from Pfizer and BioNTech and the other from Moderna—have been approved for emergency use in the United States by the Food and Drug Administration.

They both require two doses for each individual getting inoculated and have exhibited strong efficacy in clinical trials. The Pfizer vaccine’s reported efficacy is 95 percent, while Moderna’s vaccine is believed to be 94 percent. The FDA was expected to green-light a vaccine if it was 50 percent effective.

“To have a vaccine that is 95 percent effective—as the two vaccines we currently have are—is a medical marvel,” said Farrugia, who has led the Mayo Clinic since January 2019.

The vaccines come at a critical moment in the ten-month-long pandemic that has infected seventy-eight million and killed 1.7 million worldwide, according to the latest data from Johns Hopkins University.

“It is essential that people get educated and then they get vaccinated,” Farrugia said. “It’s the only way we’re going to get out of this pandemic.”

Earlier this week, an advisory panel for the U.S. Centers for Disease Control and Prevention recommended, by a vote of thirteen to one, that the next two groups of Americans to receive the coronavirus vaccine should be those seventy-five and older and frontline essential workers.

The so-called Phase 1b group is estimated to include about forty-nine million people, or nearly 15 percent of all Americans, according to the Advisory Committee on Immunization Practices (ACIP).

According to the committee, these workers “are in sectors essential to the functioning of society and are at substantially higher risk of exposure” to the novel coronavirus.

The ACIP also recommended that Phase 1c should include individuals between the ages of sixty-five and seventy-four, those between sixteen and sixty-four who have high-risk underlying conditions, and the remaining essential workers. The underlying conditions can include obesity, cancer, and smoking, among others.

This group represents roughly 129 million Americans, about a third of the country’s population.