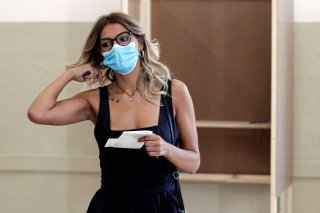 An unnamed 25-year-old man from Reno, Nevada, is believed to be the first person in the United States to contract the novel coronavirus twice, according to a pre-print study.

According to the study’s researchers, the man tested positive for COVID-19 on April 18 after exhibiting symptoms that included a sore throat, headache, nausea, and diarrhea.

By April 27, the symptoms had largely dissipated, and two later coronavirus tests came back negative on May 9.

On May 31, however, the man reported having a fever, headache, cough, nausea, and diarrhea. The patient’s condition gradually worsened, and five days later, he was hospitalized.

When he was tested for COVID-19, it came back positive, despite the fact that samples from the patient showed that they possessed antibodies against the virus.

The researchers concluded that the data supports “an instance of reinfection with SARS-CoV-2.”

But they added: “This may represent a rare event.”

Mark Pandori, director of the Nevada State Public Health Laboratory, said the confirmed reinfection will have “implications” for future vaccines and the ability to achieve herd immunity.

“It is just one finding, but it shows that a person can possibly become infected with SARS-CoV-2 a second time,” he said in a statement.

Despite being roughly eight months into the global pandemic, there is still much that is unknown regarding how long immunity to COVID-19 lasts. Research on other members of the coronavirus family of viruses suggests immunity has the potential to last for one to three years, the study’s authors noted.

“After one recovers from COVID-19, we still do not know how much immunity is built up, how long it may last, or how well antibodies play a role in protection against a reinfection,” Pandori said.

“This is a novel disease. We still have a steep learning curve ahead and lots of work to do, especially as inconvenient truths arise.”

Earlier this week in Hong Kong, researchers reported what appeared to be the world’s first confirmed case of COVID-19 reinfection.

The thirty-three-year-old man first contracted the virus in late March and then, four and a half months later, seemingly was infected again while traveling in Europe.

Researchers at the University of Hong Kong were able to sequence the virus from the patient’s two infections and found that they did not match—indicating that the second infection was not related to the first.

There are now more than 24.6 million confirmed cases of coronavirus worldwide, including at least 833,000 deaths, according to the latest data from Johns Hopkins University.