Parents are Finding Ways to Vaccinate Their Kids, Prior to Approval 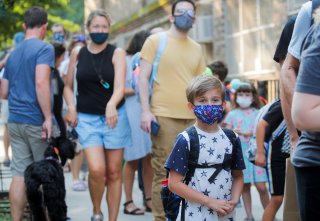 News broke over the weekend that the FDA may approve the coronavirus vaccine for children aged five to twelve sometime this fall, possibly as early as October. Pfizer, in fact, has sought that approval.

According to Reuters, health regulators said last week that “children in clinical trials testing COVID-19 vaccines should be monitored for at least two months for side effects, suggesting that the agency is considering a quicker path to authorize the shot for emergency use than full approval.”

However, just because children are not yet eligible for the vaccines, doesn’t mean some of them aren’t getting them.

The New York Times reported Saturday that some families are finding ways to get their children the jab, even though it hasn’t yet been approved.

In many cases, it’s through clinical trials, with some parents seeking them out and enrolling their children. Some of them, in fact, are “placebo-free” trials, meaning that participants are guaranteed the actual vaccines rather than placebos.

There have also been some cases, per the New York Times, in which parents have sought “off-label” shots for their children.

The FCC issued a statement Sunday about their plans for eventually approving vaccines for younger children, vowing to “follow the science” on the safety and effectiveness of doing so.

“Many of our team at the FDA are parents and grandparents themselves, and our team shares the same concerns as many in our country about protecting our loved ones from COVID-19. We are therefore also eager to see COVID-19 vaccines available for young children,” the statement, from acting FDA chair Janet Woodcock, and Center for Biologics Evaluation and Research Peter Marks, said.

“We also know that we all share the interest in making sure this process is done with safety at top of mind,” Woodcock said. “As regulators, we recognize we have an important task ahead of us that will require us to act expeditiously while undertaking an extremely meticulous and thoughtful review once we receive requests to authorize a COVID-19 vaccine for emergency use or submissions for approval of a COVID-19 vaccine for this population.”

“Just like every vaccine decision we’ve made during this pandemic, our evaluation of data on the use of COVID-19 vaccines in children will not cut any corners,” the statement added.

Just as vaccines for children have not yet been approved, neither have booster shots. However, according to a report issued by the U.S. Centers for Disease Control and Prevention at the end of August, more than a million Americans had received boosters at that time.

That mostly means immunocompromised people, frontline healthcare workers, and the elderly, who have been granted permission to receive an additional shot of the vaccine.