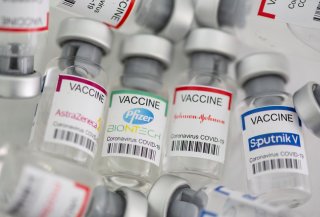 Pfizer CEO Albert Bourla has contended that he believes that it is “likely” that a coronavirus variant that is resistant to currently available vaccines will eventually emerge.

“Every time that the variant appears in the world, our scientists are getting their hands around it,” he said on Tuesday during an interview on Fox News’ America’s Newsroom.

“They are researching to see if this variant can escape the protection of our vaccine. We haven’t identified any yet, but we believe that it is likely that one day, one of them will emerge,” he added.

Bourla, however, was confident that Pfizer could manufacture within about three months new versions of its vaccine that could be effective against a variant.

“We have built a process that within ninety-five days from the day that we identify a variant as a variant of concern, we will be able to have a vaccine tailor-made against this variant,” he noted.

The head of the National Institute of Allergy and Infectious Diseases asserted that the United States could be “in trouble” if this happens because recent studies have revealed that the Delta variant possesses viral loads that are a thousand times higher than the original strain.

“What we’re seeing, because of this increase in transmissibility, and because we have about ninety-three million people in this country who are eligible to get vaccinated who don’t get vaccinated—that you have a significant pool of vulnerable people,” Fauci noted in an interview with McClatchy.

“If we don’t crush the outbreak to the point of getting the overwhelming proportion of the population vaccinated, then what will happen is the virus will continue to smolder through the fall into the winter, giving it ample chance to get a variant which, quite frankly, we’re very lucky that the vaccines that we have now do very well against the variants—particularly against severe illness. We’re very fortunate that that’s the case. There could be a variant that’s lingering out there that can push aside Delta,” he continued.

In recent weeks, new coronavirus cases largely have been driven by the Delta variant, which was first detected by scientists in India last fall. Here in the United States, it represents more than ninety-five percent of all sequenced cases, according to the U.S. Centers for Disease Control and Prevention (CDC).

The seven-day average of daily new coronavirus cases now stands at about one hundred forty-seven thousand, which is more than ten times higher compared to two months ago. As of Wednesday, nearly fifty-two percent of the U.S. population is fully vaccinated, while about sixty-one percent have had at least one shot, according to data compiled by the CDC.