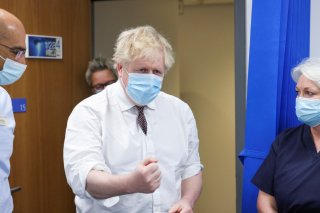 Health officials in the United Kingdom have discovered a likely outbreak of polio in London for the first time in nearly four decades.

As reported by National Public Radio, there have been no cases of polio detected directly in the country, but local scientists have identified the virus in sewage water, the UK Health Security Agency (UKHSA) said in a release Wednesday.

Per Reuters, the risk to the general public is extremely low, the agency added, largely due to the fact that the vast majority of people in the United Kingdom were vaccinated against polio during childhood. The agency, nevertheless, is encouraging parents to double-check whether their children are inoculated.

Once a common virus, polio is transmitted through contaminated water and food or contact with an infected person. In some young children, the disease can affect the nerves and cause muscle weakness or paralysis, which can sometimes be fatal. There is no cure, but it is easily preventable by the polio vaccine.

The last case of polio in the United Kingdom was seen in 1984. The country was declared polio-free in 2003. Last year, there were more than 600 cases of polio worldwide.

Between February and May, scientists discovered several samples containing closely related versions of polio in wastewater at the London Beckton Sewage Treatment Works, which is the largest water treatment plant in the country. The genetic sequences of the virus suggest that “there has been some spread between closely linked individuals in north and east London,” the UKHSA said.

“It sounds like the outbreak is very small. The outbreak could be within an extended family. Transmission would require a concentration of people who had not yet been vaccinated,” virologist Angela Rasmussen, who studies polio at the University of Saskatchewan in Canada, told NPR.

However, “my biggest concern is the fact that there is a larger population now that hasn't been vaccinated on schedule. I think that applies everywhere. And that's because of the SARS-CoV-2 pandemic,” she continued.

In response to the discovery, scientists have quickly expanded surveillance of sewage samples to try and pinpoint where the initial outbreak had occurred and whether it is still ongoing.

“We are urgently investigating to better understand the extent of this transmission,” epidemiologist Vanessa Saliba, who consults for the UKHSA, noted in a statement.

Meanwhile, the World Health Organization’s director-general Tedros Adhanom Ghebreyesus acknowledged that the agency is working with the United Kingdom on a concerted response.

“Surveillance, vaccination and investment to end polio is critical,” he tweeted.