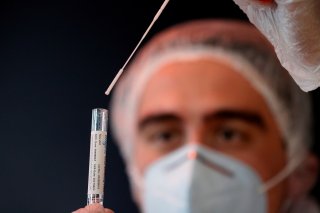 Dr. Scott Gottlieb (see our interview with him here), the former commissioner of the U.S. Food and Drug Administration, has given a stern warning that the United States is “at a tipping point” in being able to limit the further spread of the novel coronavirus.

The United States on Monday hit a record daily high of 69,967 coronavirus cases, eclipsing the prior all-time high set on Sunday, according to data from Johns Hopkins University. The seven-day average of new daily cases has jumped 20 percent compared to a week ago.

In all, the United States has witnessed roughly 8.7 million confirmed cases and at least 225,000 related deaths.

“We’re likely to see a very dense epidemic. I think we’re right now at the cusp of what is going to be exponential spread in parts of the country,” Gottlieb said during an interview on CNBC’s “Squawk Box” on Monday.

Despite the grim numbers overall, Gottlieb, who worked at the FDA under President Donald Trump and former President George W. Bush, contended that there is still a window of opportunity for the country not having to rely on potentially economically crippling lockdowns and stay-at-home orders in fighting the virus.

“I think we’re at a tipping point right now where if we took some aggressive, targeted steps right now we could potentially forestall the worst of it,” he said.

“I know people are exhausted. It’s been very hard on families and on individuals, on businesses, especially, but we really have two or three months of the acute phase of this pandemic to get through. … We need to try to pull together and see what we can do to try to control the spread so our health-care systems don’t become overwhelmed. Because once they do, once we reach that breaking point, the policy action that we’re going to need to take is going to be more aggressive, unfortunately, than if we had did some things up front.”

Although Gottlieb did acknowledge that many Midwestern states are seeing a surge in new coronavirus cases, the spread is much more evenly distributed now across the country compared to when the pandemic began.

“The other states are going to catch up. They’re a little bit in the early phase of this, but you’re going to see pretty diffuse infection across the country, and a lot of places are going to reach very high levels of infection. That’s what it looks like, and that’s why this is probably going to be a difficult couple of months.”

Gottlieb added that it seems unlikely that a coronavirus vaccine will be widely available to the general population in the coming months.