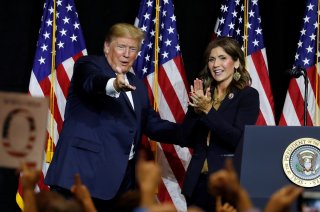 Like many of the states in the region, South Dakota is continuing to break coronavirus case records.

According to the South Dakota Department of Health, the state added more than a thousand new cases for the first time on Friday morning, including nine more deaths. On Thursday, it reported 973 new cases.

South Dakota is second—only to North Dakota—in the number of coronavirus cases per 100,000 people. Cases have surged by 51 percent over the last two weeks, and of the nation’s ten hottest spots for the virus, six are located in South Dakota, according to New York Times data.

Despite such troubling numbers, South Dakota Governor Kristi Noem continues to defend her mostly hands-off approach in dealing with the virus. She has never argued for the need of a statewide mask mandate or stay-at-home orders.

“I’m going to continue to trust South Dakotans to make wise and well-informed decisions for themselves and their families,” she wrote Wednesday in an op-ed that was published in the Rapid City Journal.

“I’m also asking that we all show respect and understanding to those who make choices we may not agree with. Our trust in the data and in each other has been rewarded. This is a testament to the people of South Dakota—our greatest weapon against this common enemy.”

Scott Munsterman, who was the mayor of the city of Brookings from 2003 to 2009, believes that the “state has made a good effort of making its citizens aware of the virus and safe practices.”

“The state of South Dakota has always taken the approach of personal responsibility, protecting property rights, and overall less government,” he told The National Interest.

“Overall, I sense that residents may favor that these safe practices be mandated. However, the closing or restrictions of access to businesses and the economic sanctions approach is not an overall acceptable intervention.”

Munsterman, who helped develop a pandemic plan for the H1N1 virus during his time as mayor, added that the current political climate has made it more difficult to institute a plan that a majority of the state’s residents are willing to embrace.

“It is clear that face masking and distancing are safe practices that should be followed to mitigate the risk of infection along with sanitation efforts. Mandating the use of PPE should be implemented in my opinion. Unfortunately, it has become a charged, political decision,” he said.

“At the end of the day, the solution ultimately rests on the health of the host—people. If the host is healthy, if the host can be provided with immunity, then the virus has nowhere to go. Further studies and education are needed in the United States to help people become and stay healthier as these types of viruses may be in store in our future.”

Noem, however, often has been criticized for largely ignoring what medical experts have said about masks and social distancing.

“There are many others who question the effectiveness of masks, and South Dakotans should take the time to read this information so they can make informed decisions for themselves and their families. As I've said before, if folks want to wear a mask, they should be free to do so. Similarly, those who don't want to wear a mask shouldn't be shamed into wearing one. And government should not mandate it. We need to respect each other’s decisions—in South Dakota, we know a little common courtesy can go a long way,” she wrote.

“Recently, a South Dakota doctor wrote me, thanking me ‘for treating your fellow citizens of South Dakota like adults...’ I tell you this because there are also some South Dakota medical professionals who have written to tell me of their fears about voicing their thoughts on the situation.”