Should Vaccinated People Be Worried About “Breakthrough Infections?” 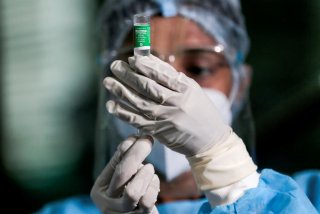 Around the United States, many jurisdictions that lifted their coronavirus lockdowns in the spring, following an initially successful vaccination drive, have now re-implemented them. The main cause of this has been the surge in cases from COVID-19’s “Delta variant,” a new strain of the virus that is more transmissible than the original.

While new infections and deaths are still significantly lower than they were during the winter, they have trended steadily upward over the summer—and some of them, albeit far fewer per capita, have been “breakthrough infections,” cases from Americans who had previously been inoculated from the virus.

Around 165 million people, or just more than half of the U.S. population, are now fully vaccinated against the coronavirus. For this reason, there is understandable concern about the potential for breakthrough infections to affect them.

Scientists have argued that the vaccines continue to be effective, and the fact that breakthrough infections occur in a small minority of those who have been vaccinated highlights how effective the inoculations are in a more broad sense.

The data collected by the Centers for Disease Control and Prevention (CDC) highlights this point. Per the information that the agency has collected, 7,101 people in the United States who have received both doses of the vaccine were later hospitalized for the disease, and of that group, 1,507 later died of the disease.

This is not to say that only 0.005 percent of people who receive both shots are likely to contract COVID-19 later. The vaccines were billed as being ninety to ninety-five percent effective against the virus, meaning that, on average, one or two out of every twenty people will develop an infection later. However, because the vaccine’s immunity protects against the worst symptoms of the virus, these cases often go unreported. A person is unlikely to take a COVID test unless they are already feeling ill, which many people affected by mild cases do not.

Still, because the vaccination gives one a 99.999 percent chance of survival against the Delta variant, anyone who receives a vaccine should be relatively assured that they are safe.

It is important to note that some of the CDC’s data is outdated, and comes from the months before the Delta variant was as widespread as it is today. However, current statistics still overwhelmingly show that vaccinated Americans are far safer than unvaccinated ones. A Kaiser Family Foundation survey, published in July, found that ninety-five percent of COVID-19 hospital patients in eighteen reporting states were unvaccinated people. Comparatively, vaccinated Americans have little to fear.