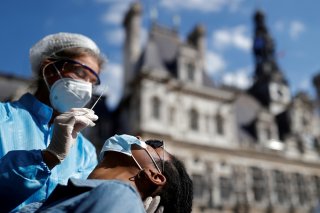 The meta-analysis, published in the Journal of the American Medical Association, confirms a similar survival benefit reported in June, with the new data pointing toward a reduced risk of death by one-third.

“The consistent findings of benefit in these studies provide definitive data that corticosteroids should be first-line treatment for critically ill patients with COVID-19,” Hallie Prescott and Todd Rice, professors of medicine at the University of Michigan and Vanderbilt University, respectively, stated in an accompanying JAMA editorial.

Based on the new evidence, the WHO has issued new treatment guidance that strongly recommends steroids to treat severely and critically ill patients—but not those with mild forms of the disease.

Such patients should receive seven to ten days of treatment, a WHO panel noted.

The agency, however, warned against indiscriminate use of steroids, saying that patients who are not severely ill are unlikely to benefit and may suffer from potentially strong side effects.

Moreover, unwarranted use of the drugs could deplete global supplies, depriving those who need the medications the most.

Research has shown that corticosteroids do not attack the novel coronavirus—instead, the drugs work by reducing the activity of a patient’s immune system to prevent it from attacking the lungs.

Many coronavirus patients do not die directly from the virus—but from the body’s overreaction to the infection, according to medical experts.

Other health groups—including the National Institutes of Health and the Infectious Diseases Society of America—have already released similar guidelines recommending the use of steroids to treat severe coronavirus cases.

Still, for some medical professionals, there are some important unanswered questions.

“It still remains unclear if there is any use in starting (steroids) earlier,” Nahid Bhadelia, medical director of the Special Pathogens Unit at the Boston University School of Medicine, told STAT.

“Most clinicians, including myself, would not do so with the current data.”

One major concern is that if steroids are given too early in a coronavirus patient, they might interfere with the body’s ability to eliminate the virus.

Steroids, though, could be of great benefit to patients who don’t yet need oxygen support but exhibit early signs that their immune systems are going into overdrive.

“It would be interesting to know if co-administration of an antiviral may help reduce viral load while the earlier steroids work on the inflammatory component in that group of people,” Bhadelia said.

“We also need more data around co-infections in the setting of steroid use.”

There are now more than 25.8 million confirmed cases of coronavirus worldwide, including at least 858,000 deaths, according to the latest data from Johns Hopkins University.