Study: Coronavirus Can Survive 28 Days on Glass and Money 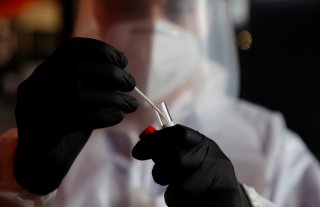 A new study by Australian researchers has discovered that the coronavirus can survive on banknotes, glass, and stainless steel for up to twenty-eight days.

The findings, published in Virology Journal, revealed that in an environment that is 68 degrees Fahrenheit, SARS-CoV-2 was able to remain infectious for nearly a month on smooth surfaces like banknotes and smartphone screens.

For comparison, the influenza A virus (IAV) was found to survive on similar surfaces for up to seventeen days.

“It really reinforces the importance of washing hands and sanitizing where possible and certainly wiping down surfaces that may be in contact with the virus,” the study’s lead researcher Shane Riddell told Reuters.

The World Health Organization said that this particular study was able to build on previous research that helped outline the agency’s guidelines on hand hygiene and using disinfectants.

“The persistent detection of SARS-CoV-2 … in the experimental conditions from this study is not unexpected and informs our understanding of virus survivability,” April Baller, a WHO infection prevention and control expert, told Reuters.

The researchers conducted experiments in environments that were 68, 86, and 104 degrees Fahrenheit, and what they found was that the virus could survive for longer periods in cooler temperatures and on smoother surfaces.

“So, heading into summer that’s certainly going to be an important factor that the virus won’t last as long in the warmer temperatures,” Riddell said, referring to the upcoming summer season in the Southern Hemisphere.

Moreover, all of the experiments were completed in the dark to eliminate the impact of ultraviolet light, which has been shown that it can kill the virus.

“So, in the real world, results would likely be shorter than what we were able to show,” Riddell said.

These findings come on the heels of a recent study out of Japan that found that the novel coronavirus can survive on human skin for up to nine hours. For comparison, IAV lasts for roughly two hours.

Other studies have discovered that the coronavirus was detectable for up to twenty-four hours on cardboard and seventy-two hours on plastic and stainless steel.