1 in 4 Americans Not Washing Hands Regularly Amid Coronavirus Pandemic 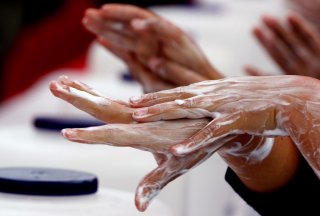 A new report by the U.S. Centers for Disease Control and Prevention has found that roughly 25 percent of Americans don't remember to wash their hands at critical times, such as after sneezing, coughing, and blowing their nose.

In gathering the data, the agency examined hand-washing behaviors via national surveys before and during the ongoing coronavirus pandemic.

Men, young adults aged eighteen to twenty-four, and non-Hispanic White adults were pinpointed in needing hand-hygiene reminders the most often, the report stated.

“These findings underscore the importance of promoting frequent hand-washing during the ongoing COVID-19 pandemic, especially after coughing, sneezing, and blowing one’s nose,” the report’s authors wrote.

“Men, young adults, and White adults continue to be less likely to remember to wash their hands, despite improvements made from 2019 to 2020.”

In 2019, 63 percent of respondents noted that they washed hands before eating at home, 55 percent did the same at a restaurant, and 53 percent did so after coughing, sneezing, or blowing their nose.

This eye-opening report comes on the heels of a recent study out of Japan that discovered that the novel coronavirus can survive on human skin for up to nine hours.

The findings, which were published in the journal Clinical Infectious Diseases, also revealed that SARS-CoV-2 was able to easily outlast on human skin the influenza A virus (IAV), which was able to survive for roughly two hours.

The coronavirus was later mixed with mucus to imitate a cough or sneeze, and what the researchers from Kyoto Prefectural University of Medicine found was that the contagion could survive even longer—about eleven hours.