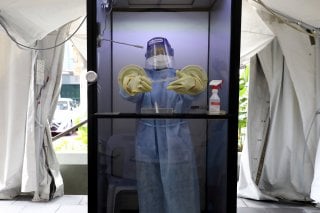 A new study out of Japan has discovered that the coronavirus can survive on human skin for up to nine hours.

The findings, which were published in the journal Clinical Infectious Diseases, also revealed that SARS-CoV-2 was able to easily outlast on human skin the influenza A virus (IAV), which was able to survive for roughly two hours.

The coronavirus was later mixed with mucus to imitate a cough or sneeze, and what the researchers from Kyoto Prefectural University of Medicine found was that the contagion could survive even longer—about eleven hours.

Both viruses, though, could be quickly inactivated with hand sanitizer that had 80 percent ethanol—underscoring the importance of a person washing their hands for at least twenty seconds each time during this ongoing pandemic.

One major limitation of the study was that the researchers did not fully consider the viral load needed to cause a positive coronavirus test after contact with contaminated human skin. The authors admitted that more research is warranted to examine the issue.

This particular study comes after other scientific efforts that aimed to pinpoint how long the coronavirus can survive on various surfaces.

One study that was published in the New England Journal of Medicine discovered that the coronavirus was detectable for up to twenty-four hours on cardboard and seventy-two hours on plastic and stainless steel—which naturally drove people to wonder if they could, in fact, contract the disease from delivery packages.

According to the U.S. Centers for Disease Control and Prevention, however, the chance of getting coronavirus from such packages is considered very low. It’s even lower when the packages have traveled over a period of days or weeks.

The World Health Organization has agreed with that assessment, saying that it is very unlikely for a package to be contaminated after being exposed to different weather conditions.

Medical experts, though, are open to the idea of concerned individuals taking extra precautionary steps, such as leaving packages outside or in the garage for a day or two after receiving them.