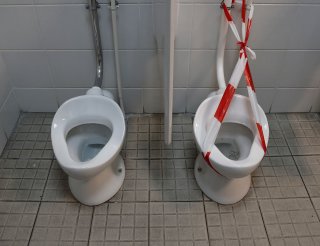 The novel coronavirus has the potential to spread throughout buildings through toilets and drainpipes, according to researchers at the Chinese Center for Disease Control and Prevention.

The study, which was published in the journal Environmental International, focused on the discovery of SARS-CoV-2, the virus that causes the coronavirus, in the bathroom of an unoccupied apartment in Guangzhou, China.

The finding suggests that the virus may have entered the sixteenth-floor apartment through the toilet or drain pipes. According to the researchers, traces of SARS-CoV-2 were detected on the sink, faucet, and shower handle.

The contaminated bathroom was found to be directly above an apartment that housed five individuals, who a week earlier, were confirmed to have contracted the coronavirus.

After the discovery, the researchers conducted a “tracer simulation experiment” to see whether the virus could be spread through pipes via tiny airborne particles, or aerosols, which are often produced by the force of a toilet flush.

Those aerosols were found to have traveled up to twelve levels above where the coronavirus-positive individuals had lived.

“The possibility of aerosol transport through sewage pipe after flushing the toilet at the 15th-floor restroom was confirmed by an onsite tracer simulation experiment showing that aerosols were found in the restroom of apartments on the 25th floor and 27th floor,” the study’s authors wrote.

Transmission through a shared elevator could not be ruled out, however, according to the study.

To further support their study’s findings, the researchers pointed to a specific case in 2003 during the SARS outbreak when more than 300 residents in Hong Kong’s Amoy Gardens private apartment building contracted the virus.

Forty-two residents eventually died, making it the most-deadly community outbreak of SARS, a virus which is closely related to the coronavirus.

“High concentrations of viral aerosols in building plumbing were drawn into apartment bathrooms through floor drains,” the report stated.

Previous research has shown that toilets and urinals can generate coronavirus-laden aerosols that have the potential to infect people.

According to a recent study out of Yangzhou University in China, researchers are now suggesting that wearing a mask in public restrooms should be mandatory.

The team simulated urinal flushing via computer models, and they were eventually able to estimate that within just five seconds of flushing, virus particles had the potential to reach a height of more than two feet.

It took about thirty seconds for the virus particles to reach the same height after flushing a toilet, according to the study, which was published in the journal Physics of Fluid.