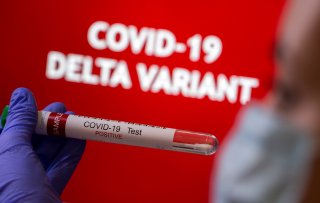 A new study out of the United Kingdom has revealed that the highly transmissible Delta variant doubles the risk of hospitalization for those who remain unvaccinated.

The research, which was published in the British journal The Lancet, was able to tap into data from eight thousand seven hundred patients carrying the Delta variant and more than thirty-four thousand individuals currently infected with the Alpha variant.

“Emergency care attendance combined with hospital admission was also higher for patients with the Delta variant, showing increased use of emergency care services as well as inpatient hospitalization,” it continued.

In recent weeks, new coronavirus cases are largely being driven by the Delta variant, which was first detected by scientists in India last fall. It has already spread to more than one hundred fifty countries and has become the dominant strain in the United States, representing more than 95 percent of all sequenced cases, according to the U.S. Centers for Disease Control and Prevention.

The current seven-day average of daily new coronavirus cases in the United States now stands at roughly one hundred fifty thousand—which is more than ten times higher compared to just two months ago and about 21 percent higher compared to two weeks prior, according to the latest data from Johns Hopkins University.

The British findings come on the heels of a separate study conducted by the CDC that indicated that the unvaccinated are nearly thirty times more likely to be hospitalized with coronavirus than those who have been inoculated.

“These infection and hospitalization rate data indicate that authorized vaccines were protective against SARS-CoV-2 infection and severe COVID-19 during a period when transmission of the Delta variant was increasing,” the agency wrote in the study.

“Efforts to increase COVID-19 vaccination, in coordination with other prevention strategies, are critical to preventing COVID-19–related hospitalizations and deaths,” it added.

Meanwhile, a key CDC advisory group unanimously endorsed on Monday the full approval of Pfizer and BioNTech’s vaccine for Americans aged sixteen and older. The endorsement comes a week after the U.S. Food and Drug Administration granted the same shot full approval.

Over 52 percent of the U.S. population is fully vaccinated, while about 62 percent have had at least one shot, according to data compiled by the CDC.

President Joe Biden’s administration also stated that it would be open to the idea of moving up the timeline for Americans to get their coronavirus booster shots by up to three months. Health officials had been planning to roll out the booster shots to individuals eight months after receiving two coronavirus vaccine doses.