Study: Syria May Only Be Counting 1.25 Percent of Actual Coronavirus Fatalities 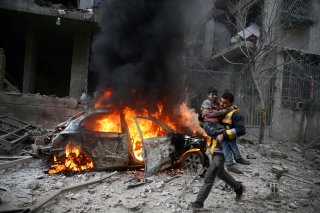 Syria’s government has officially confirmed only 2,703 coronavirus cases and 109 related deaths since the global pandemic began.

Those figures, however, are widely seen as massive undercounts—in fact, the reported death toll is only 1.25 percent of the actual number of fatalities, according to a new study by researchers from Imperial College London’s COVID-19 Response Team, the London School of Hygiene and Tropical Medicine, the Syria team at the London School of Economics, Google, the European Institute of Peace, and the Middle East Institute.

“Given that Damascus is likely to have the most robust surveillance in Syria, these findings suggest that other regions of the country could have experienced similar or worse mortality rates due to COVID-19.”

There are no reliable numbers for the portions of the country currently being held by rebel groups.

In recent days, several high-profile cases have garnered much attention locally, hinting at the true scale of the viral outbreak in the country.

Last week, negotiations on a new Syrian constitution was abruptly halted because four of the twenty-three members of the official Syrian delegation tested positive for the coronavirus.

Then seven players on the national soccer team tested positive, according to the Syrian Sports Federation. A popular Facebook group for Syrian lawyers noted that it had lost thirty-one attorneys to the contagion in just the past month.

Given that more cases are being highlighted in the media, many Syrians have gone online in search of medical advice. Facebook pages that have tens of thousands of followers are now redirecting their focus from bombs and gunfire to the coronavirus.

The government has also boosted its efforts to raise more awareness about the hidden dangers of the virus and track its spread—even highlighting the importance of wearing face masks and coverings and social distancing.

There are now four laboratories to process coronavirus tests, and a newly created website is being used to monitor cases across the country.

This study comes after the World Health Organization reported that in the week ending on Sept. 13, the number of deaths worldwide due to coronavirus increased by 8 percent—a total of 40,600 fatalities—compared to the previous week.

Now more than eight months into the pandemic, there are roughly 29.4 million confirmed cases of coronavirus worldwide, including at least 931,000 related deaths, according to the latest data from Johns Hopkins University.