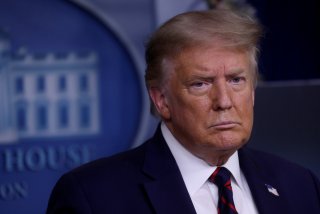 Tensions are rising between White House and Senate Republicans as President Donald Trump pushes Congress to include a payroll tax cut in the next coronavirus relief package.

The payroll tax cut has remained a key priority for Trump, as he noted at an interview on Sunday with Fox News’ Chris Wallace that he would “consider not signing” the legislation if it didn’t include the tax cut.

“The president is very committed to a payroll tax deduction,” White House chief of staff Mark Meadows said Tuesday. “I don’t know that in any negotiation that there are red lines but there are certainly high priorities and it will remain a very high priority for the president.”

The cut immediately boosts workers’ paychecks, as it reduces the amount of money withdrawn to fund certain federal programs like Social Security and Medicare. The tax reduction, however, could force the national deficit to rise, a move that Republicans are hesitant to support after the $2 trillion Coronavirus Aid, Relief and Economic Security (CARES) Act passed in March.

“I’m not a fan of that,” Sen. John Thune of South Dakota said. “If it’s a choice between doing checks and payroll tax cut, I think it’s pretty clear the checks actually have a more direct benefit to the economy.”

“I think consumers are more likely to spend a check they get in the mail than some slight plus-up that they get - that probably automatically gets deposited in their bank account in the fourth quarter of this year,” Thune said.

Democrats have advocated against applying the payroll tax cut in the upcoming legislation.

"The Trump Administration has fixated on a payroll tax cut - an idea that will not only will harm those who rely on Social Security, but will do nothing for the tens of millions of Americans who have lost their jobs during this crisis," Senate Minority Leader Charles Schumer (D-N.Y.) said Tuesday on the Senate floor. "Many of my Republican colleagues aren’t too keen on that idea, with good reason, and yet it may still be in Leader McConnell’s proposal. Because he and the other Republicans are afraid to tell President Trump no, even when they know he’s wrong."

A payroll tax cut was seen for employers in the CARES Act, allowing them to defer half of their tax payments to 2021 and the other half to 2022.