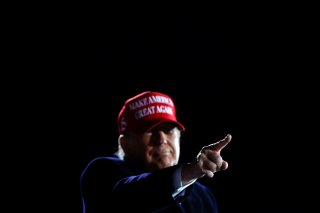 President Donald Trump on Thursday pinned the blame on House Speaker Nancy Pelosi (D-Calif.) for stalling passage of the coronavirus stimulus package, as he noted he is “ready to sign.”

“Republicans are ready to go, I am ready to sign!!!” the president added.

Trump's comments come after Treasury Secretary Steven Mnuchin said Wednesday that another relief bill “would be difficult” to pass before Nov. 3, despite months of back-and-forth talks between both sides of the aisle and a strained economy.

“I’d say at this point getting something done before the election and executing on that would be difficult, just given where we are,” Mnuchin said at a conference.

The treasury secretary added that Pelosi’s reluctance to reach an agreement is “definitely an issue” in terms of stalling the package.

The president has blasted Pelosi in the past over halting coronavirus aid talks, as top Democrats recently rejected Mnuchin’s $1.8 trillion counter-offer to a $2.2 trillion Democratic proposal passed by the House of Representatives last month.

Negotiations have flopped since Mnuchin and Pelosi disagree on several key provisions that would be featured in a future stimulus package including language regarding a national coronavirus testing plan, funding for state and local governments and unemployment benefits. Pelosi has also avidly disapproved of a liability shield that would protect businesses, schools and hospitals from coronavirus-related incidents.

Mnuchin has also criticized Pelosi’s persistence in forming a comprehensive deal that addresses all of the nation’s boiling issues, instead of passing specific legislation for sectors that need it the most, like the airline industry.

After calling off negotiations for another relief bill, Trump urged Mnuchin and chief of staff Mark Meadows to “go big or go home” in a tweet on Wednesday, pumping confusion over whether the country will receive economic relief.

Economic aides close to the president recently suggested, however, that Trump is willing to hit the Democratic bill’s price tag or even more, which was originally at $3.4 trillion. The president’s willingness to reach across the aisle and compromise on big-spending has pushed Pelosi center stage, as she continues to balk at striking a deal.

As of going to press, Pelosi has not responded to Trump’s remarks on Twitter.