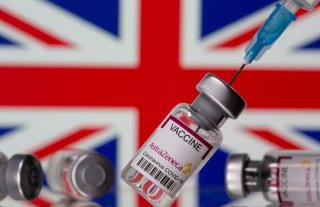 For those individuals who already have received both of their coronavirus vaccine doses, the protection against the virus has been shown to moderately diminish over time, according to a new study out of the United Kingdom.

An analysis from the country’s ZOE Covid app study, which included the participation of more than 400,000 individuals who had received both shots of the Pfizer-BioNTech vaccine, revealed that it was nearly 90 percent effective in protecting against the contagion a month after being fully inoculated.

The overall effectiveness, however, slumped to 74 percent five or six months after receiving both vaccine doses.

Moreover, an analysis of more than 700,000 people who had received both doses of the Oxford-AstraZeneca vaccine found that effectiveness after one month dropped from 77 percent to 67 percent three or four months later.

Not All Protection Lost

Alexander Hammers, a professor of imaging and neuroscience at King’s College London, noted on a webinar that health officials have been bracing for the fact that immunity against the coronavirus wanes over time.

“So, we knew there was going to be some leveling off and the way I look at this is the leveling off is actually a little slower than I would have expected,” he said.

Despite the diminishing effectiveness of the vaccines, Hammers did claim that individuals were “still probably at least 50 percent protected.”

“Remember, when the vaccines were first developed, it was hoped that they were to have 60 percent to 70 percent efficacy and everybody was pleasantly surprised that they came in well over 80 percent—sometimes well over 90,” he continued.

According to government data in the United Kingdom, more than forty-two million people, or nearly 80 percent of the population aged over sixteen, have received two doses of a coronavirus vaccine.

Here in the United States, top health officials have confirmed that they plan to start offering coronavirus booster shots to all eligible Americans eight months after their second jabs. But the U.S. Centers for Disease Control and Prevention has made it known that there is a possibility that Americans may not need annual booster shots after the third one.

“This virus has been humbling, so I don’t want to say never, but we are not necessarily anticipating that you will need this annually,” CDC chief Dr. Rochelle Walensky recently said in an interview on CBS’ This Morning.

“It does look like after this third dose, you get a really robust response, and so we will continue to follow the science both on the vaccine side but also on the virus side,” she continued.

Since the beginning of the pandemic a year and a half ago, more than 210 million people worldwide have become infected. Officials at the World Health Organization have warned that the figure could easily reach 300 million by early next year.