Who is Shi Zhengli? All About the Chinese Virology Scientist and Her Coronavirus Research 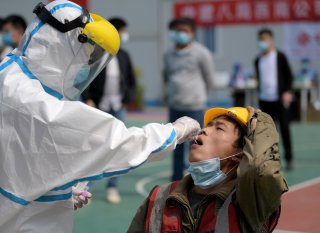 A major point of contention in recent days has had to do with how exactly the coronavirus originated. It's been believed all along that the virus' first human contact came from a wet market in China's Wuhan region, but there's also been speculation that it could have instead escaped from a lab in that area.

In the last week, some administration officials have leaked to the press, including in a Washington Post column by Josh Rogin, that some in the government believe the virus may have escaped from the Wuhan Institute of Virology, or possibly from the nearby Wuhan Center for Disease Control and Prevention.

Rogin's sources said that State Department officials had raised concerns about the practices at the Institute of Virology, although the column was clear that there is no hard, non-circumstantial evidence that the coronavirus emerged from the labs. Some scientists have argued that COVID-19 could not have come from a lab, while experts are virtually unanimous in their belief that the virus could not have been intentionally engineered.

So what is the Wuhan Institute of Virology? It's an institute that has done cutting-edge research on viruses and bats- and it also warned, in early 2019, that bat-based viruses originating in China could cause future pandemics.

Among the personnel from the lab who met with the State Department team, per Rogin, was Shi Zhengli, a world-renowned researcher into bat-based viruses, and part of the team that, in 2005, determined that the SARS virus originated in bats. Shi's work has often taken her to caves in remote areas of China, and she was called in almost immediately following the discovery of what's now called the coronavirus.

Described as "Bat Woman" in a Scientific American profile last month that provides a useful tick-tok of the virus' discovery, Shi is an expert on those types of diseases, who had warned in advance of the likelihood of such diseases leading to pandemics in the future. She went on to quickly sequence COVID-19.

This week, a Daily Mail report alleged that Shi's findings were suppressed by her bosses at the institute, and ultimately by the Chinese government. Shi, per the report, had in early January sequenced the virus' genetic makeup within three days, and determined that it was similar to SARS. However, the institute's director, Yanyi Wang, emailed staff telling them not to disclose that information publicly.

It is true that this email was sent. However, the information did not remain secret for long, as the discovery of the genome was announced on January 9, via an open-access platform. Shi’s team then released its data on the 23rd, and it was published in Nature in February.

Shi and her team have denied that the COVID-19 virus could have come from the lab, with Shi having "guaranteed with her own life" that the virus had nothing to do with the lab's work. She also said in the Scientific American interview last month that none of the viruses in her disposal records matched the genome of COVID-19. So essentially, if the virus did come from the lab, it would mean that Shi is either wrong or not telling the truth.

In reaction to the Mail story, as well as various conspiracy videos that have alleged dark motives in Shi's work, Peter Daszak, president of the EcoHealth Alliance and a man quoted in the Scientific American profile, praised his "colleague and friend" Shi on Twitter.

"Insulted, threatened by conspiracy theorists in US & China. Pressured by her own govt," he wrote. "World class virologist, 1st to identify origin of SARS-CoV-2 & wonderful generous person. She should be lauded as hero, not vilified."