Will the CDC Give Preference to Minority Groups to Receive a Coronavirus Vaccine? 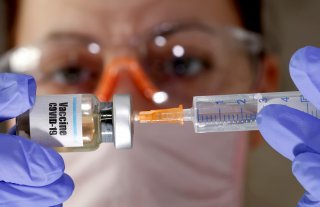 As scientists race to produce a safe and effective vaccine in hopes of preventing further spread of the coronavirus, public health experts are deliberating about which groups will be first-in-line to receive a COVID-19 vaccination.

In May the White House launched the public-private program called Operation Warp Speed, a multiagency effort to accelerate the development and manufacturing of coronavirus vaccines, with a target of providing 300 million doses to Americans by next year. There are three candidates currently in Phase 3 pivotal trials, but fears are mounting that the coronavirus vaccine approval process is being rushed, not only because of the deadly impacts of the infection but also political pressure to unveil one by November 3. A new Associated Press-NORC Center for Public Affairs Research poll indicates that only 39 percent of Americans trust President Donald Trump’s approach to the coronavirus.

To establish priority groups, or groups of people that will get a COVID-19 vaccine first in the US, the Centers for Disease Control and Prevention (CDC) and the National Institutes of Health (NIH) contracted the National Academies of Sciences, Engineering and Medicine to form a committee to assist US policymakers and global health communities by drafting a preliminary framework for the equitable allocation of vaccines for the novel coronavirus. The committee will offer recommendations to the CDC as to how to prioritize and clearly justify which Americans will get a hold of a vaccination first.

“Even if one or more safe and effective COVID-19 vaccines under development are tested and quickly approved for use, they are unlikely to be available immediately in amounts sufficient to vaccinate the whole population, despite plans to begin large-scale production of promising vaccines even before trials are completed,” the draft read.

President Trump, however, claimed, “we will be able to distribute at least 100 million vaccine doses by the end of 2020. And a large number much sooner than that,” at a news briefing. He added that distribution could begin as early as mid-October, a statement that clashed with the head of the CDC.

In a testimony before the Senate, CDC Director Robert Redfield noted that a vaccine won’t be ready until November or December and added that every American won’t get vaccinated for another “six to nine” months due to limited supply. Distribution of the vaccine will be an enormous logistical challenge. In addition, there is no guarantee that the initial vaccine will be highly efficacious.

While National Academies cited suggestions to focus on frontline health care workers, “high risk” individuals with underlying conditions and people aged 65 and older to receive the vaccine first, it also recommended prioritizing people in lower-income households with social disadvantages that prompt “health inequities.” People with inequities are more likely to be infected with the coronavirus, which is also heavily associated with race, ethnicity, occupation and socioeconomic status. A “significantly higher burden” is endured by Black, Hispanic or Latino and American Indian and Alaska Native populations, according to the academy.

“COVID-19 infections and deaths are strongly associated with race, ethnicity, occupation and socioeconomic status…Currently there is no evidence that this is biologically mediated, but rather the impact of systemic racism leading to higher rates of comorbidities that increase the severity of COVID-19 infection and the socioeconomic factors that increase likelihood of acquiring the infection,” the draft reported, including factors like crowded living conditions, lack of access to personal protective equipment (PPE) and the inability to work from home in an isolated environment.

Black Americans have been hit hard by the coronavirus as they account for about 21% of coronavirus deaths as of Sept. 17, according to The COVID Tracking Project. They are also nearly three times more likely to contract the virus than white people and a high death toll. Black communities are also more likely to battle with underlying health conditions, including diabetes and obesity. The American Psychological Association, for example, reports that 48 percent of African-American adults are clinically obese compared to 32.6 percent of whites. “Fundamental health inequities in COVID-19 and in other health conditions are rooted in structural inequalities, racism and residential segregation,” the committee added.

With these findings, it raises the question: Is the CDC prioritizing one race over another? Is it wading into political considerations as opposed to medical and scientific ones?

“Giving it to one race initially and not another race, I’m not sure how that would be perceived by the public, how that would affect how vaccines are viewed as a trusted public health measure,” Claire Hannan, executive director of the Association of Immunization Managers, a group that’s worked with the CDC on prioritizing certain groups to receive a vaccine, told The New York Times.

Trump’s administration unleashed its own distribution strategy Wednesday for an impending coronavirus vaccine, a plan that’s already received pushback from lawmakers as it fails to prioritize worse-off, socially disadvantaged populations -- associated with racial disparities -- to obtain a vaccine during the early stages of its release.

The 11-page overview and 57-page playbook created by the departments of Health and Human Services and Defense rolled out a plan to aid state, tribal, territorial and local public health programs by effectively communicating to promote confidence in the vaccine, distributing it “immediately,” securing safe administration of it and monitoring data from the vaccination program. The coronavirus vaccine, however, will not be distributed to Americans until it receives emergency use authorization or Biologics License Application approval by the Food and Drug Administration (FDA).

Officials told reporters Wednesday that within one day after a potential vaccine obtains EUA or BLA approval, vaccines will be sent and allocated by the pharmaceutical distribution and health care technology company, McKesson Corporation.

Most, if not all, of the vaccines for COVID-19 will require two doses, separated by three or four weeks.

The playbook meant to assist with the state’s distribution efforts, as state and local officials have confronted many hurdles with supply chain challenges that could ruin Trump’s targeted vaccine timeline. State officials must provide proper equipment to administer a vaccine that needs to be stored in cold temperatures, ensure training to medical staff to orchestrate the shots and gather basic supplies. Redfield estimated Wednesday that Congress mush fund a whopping $6 billion for state-level needs.

Redfield also told reporters that there will be an initial limited supply of the vaccine, so distribution would prioritize frontline health care workers, essential workers and individuals with “high risk” to be the first to receive the vaccine.

Although the administration’s strategy provides a framework to attempt to achieve no out-of-pocket costs for Americans, lawmakers argued that the distribution strategy is vague and fails to grapple equitable uptake, especially among diverse populations in low-income areas.

“This is one part of a complicated puzzle that is still missing far too many pieces,” Sen. Patty Murray (D-Wash.), ranking member for the Senate Health, Education, Labor and Pensions Committee, said the committee’s press release. “I’m glad we’re finally starting to get some of the details on vaccine distribution that I have been pressing this administration to provide for months. However, I’m concerned after reviewing this plan that the administration is still silent on a lot of big challenges that lie ahead on vaccines, including when it comes research, development, review, and manufacturing and that this plan says too little on addressing disparities.”

“We have to address the fact that people of color are currently underrepresented in vaccine clinical trials,” Murray added.

According to a survey conducted by Pew Research Center, black adults were warier to take a coronavirus vaccine if one were available today than both Hispanic and white adults, as 44% said they would not take one. Fifty-four percent of black adults, however, said they definitely or probably would take one. Hispanic and white adults were more likely to take a coronavirus vaccine, as 74% in both groups said they would.

Rather than just prioritizing a race or ethnicity to obtain a vaccine, the academy also suggested another criterion: to utilize the CDC’s Social Vulnerability Index that helps local officials to track and identify certain communities that need support to recover from public health emergencies and disasters. Variables include social determinants of health and increased infection transmission.

Regardless of who is prioritized for the first doses, this is an ongoing debate that’s sparked arguments from scientists, lawmakers and the public. But prior to anything, a successful vaccination program must go “far beyond having a vaccine that is safe and effective. Above all it requires public trust and interest in being vaccinated.” If even the most vulnerable populations -- such as black communities -- feel skeptical about taking the vaccine, how can other, less prioritized groups justify taking it?