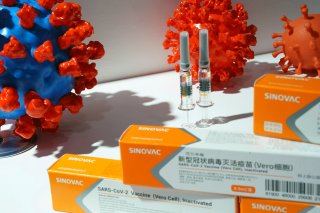 Dr. Robert Redfield, the head of the Centers for Disease Control and Prevention, is confident that the United States should have enough coronavirus vaccine doses for Americans to return to “regular life” by the third quarter of next year.

“If you’re asking me when is it going to be generally available to the American public so we can begin to take advantage of vaccine to get back to our regular life, I think we’re probably looking at third . . . late second quarter, third quarter 2021,” he told the U.S. Senate Appropriations subcommittee on labor, health and human services, education, and related agencies on Wednesday.

Redfield added that he expects coronavirus vaccinations to start in November and December, with the most vulnerable and frontline health-care workers receiving the first doses. It will take roughly “six to nine months” to get the entire U.S. population vaccinated.

“The CDC’s goal is to have enough COVID-19 vaccine for all in the United States who wish to be vaccinated,” he said.

Earlier in the day, the CDC outlined a plan that would make coronavirus vaccines free to all Americans. The agency noted that it anticipates a viable vaccine will initially be granted an emergency-use authorization before a full formal approval.

Within twenty-four hours after the U.S. Food and Drug Administration grants an emergency authorization or approval, the government plans to transport the vaccine to distribution sites across the country. The medical-supply company McKesson has already been tabbed as the chief distributor.

“We will move (the vaccine) as fast as possible within a day or so,” Paul Ostrowski, who is overseeing logistics for the Trump administration’s coronavirus vaccine initiative Operation Warp Speed, said during a press call.

Redfield told the subcommittee that he has already conducted “microplanning” for vaccine distribution with five jurisdictions in North Dakota, Minnesota, California, Florida, and Philadelphia.

“I’ll be talking to state public-health leaders this week,” he said. “We’ll be working with them so they can integrate this plan in their own unique way for their own state and there will be support to help them begin to resources plan.”

Even if a viable vaccine becomes available within the next couple of months, several polls have suggested that many Americans would refuse to roll up their sleeves for the shot.

According to a recent survey conducted by the Kaiser Family Foundation, 54 percent of respondents said they wouldn’t get vaccinated.

A Gallup poll revealed that 35 percent of Americans would refuse a free coronavirus vaccine, even if it is approved by the FDA.

According to a Yahoo News/YouGov poll, conducted between July 28 and 30, only 42 percent of Americans are planning to get vaccinated for COVID-19.