Coronavirus Vaccine: Which Americans Will Get It First? 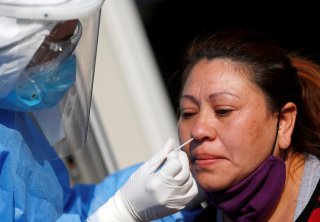 Scientists in both the U.S. and across the world are in a heated race to develop a viable vaccine to combat the ongoing COVID-19 pandemic.

There already reportedly have been great advancements made in this endeavor, and medical experts have said that a vaccine that’s at least 50% effective could be given the clear by early 2021.

Merely months away from a potential release of the vaccine, U.S. health authorities are now scrambling to put together a draft guidance on how to ration the initial doses.

According to the Centers for Disease Control and Prevention’s opening suggestion, 12 million of the most critical health, national security and other essential workers should be vaccinated first.

Next would be 110 million people at high risk from the virus—including individuals over 65 who live in long-term care facilities. The general population would come later.

CDC Director Robert Redfield has said that the public must see vaccine allocation as “equitable, fair and transparent.”

However, “not everybody’s going to like the answer,” Dr. Francis Collins, director of the National Institutes of Health, recently told one of the advisory groups the government asked to help decide, according to The Associated Press.

“There will be many people who feel that they should have been at the top of the list.”

Traditionally, the first people in line for new vaccines have been health workers and individuals considered most vulnerable to the targeted infection.

Collins, however, was open to embracing new ideas, such as considering geography and giving higher priority to people living in hard-hit regions.

“We owe them ... some special priority,” Collins said.

In the U.S., the Advisory Committee on Immunization Practices—a group established by the CDC—is supposed to recommend who to vaccinate and when. The government almost always follows these guidelines.

Considering that a COVID-19 vaccine decision is getting more complex, ethicists and vaccine experts from the National Academy of Medicine, chartered by Congress to advise the government, are being asked for their respective opinions as well.

The World Health Organization is also grappling with similar issues, as it tries to ensure that vaccines are fairly distributed to poor countries despite richer nations cornering the market for the first doses.

There are now more than 18.1 million confirmed cases of coronavirus worldwide, including at least 690,000 deaths, according to the latest data from Johns Hopkins University.

The U.S. has the most cases by far, with nearly 4.7 million confirmed infections and more than 155,000 deaths.