Bill Gates: Coronavirus Vaccine Might Not Reach the World's Poor 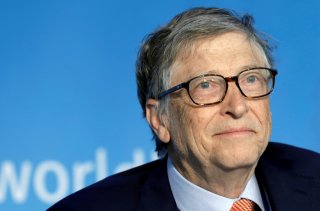 Billionaire philanthropist Bill Gates is cautiously optimistic that a viable coronavirus vaccine will be available by 2021, but he remains concerned that the potentially life-saving doses won’t reach many of the world’s poor.

“It shouldn’t just be the rich countries winning a bidding war (for a coronavirus vaccine),” he said during a recent conference call with reporters.

“Misallocating the vaccine would cause dramatic additional deaths.”

Rich countries like the United States, Japan, and the United Kingdom have already pre-ordered more than two billion doses of the vaccines—which could leave limited supplies to poorer nations in the coming year.

In the recently released “The Goalkeepers Report” by the Bill & Melinda Gates Foundation, modeling from Northeastern University was used to forecast that twice as many people could die from the ongoing pandemic if wealthy countries decide to hoard the first two billion vaccine doses.

The eye-opening report also noted that the pandemic disproportionately impacts women, racial and ethnic minority groups, and those living in extreme poverty.

“The pandemic, in almost every dimension, made inequity worse,” Gates said.

“The poorer countries are suffering far more than the richer countries because of a lack of fiscal resources to go on.”

Still, Gates didn’t openly say that richer countries like the United States shouldn’t prioritize vaccine doses for their own populations.

Gates, however, did note that the United States could put more effort into ensuring that more people worldwide have access to vaccine doses.

“The one thing that the United States has not done yet, but I’m very hopeful it will, is to allocate substantial resources for the vaccine procurement and other drugs and diagnostics for the pandemic,” he said.

“If they would couple that with their funding of the R&D and facilitate the vaccines to be made in many factories, then you’d have the complete picture there. So, nobody’s saying that . . . there shouldn’t be any recognition of where the trials have been done, where the R&D funding came from. The way to deal with this problem is to have that capacity be as large as possible.”

The Microsoft founder, who has been warning about the threat of a global pandemic since 2015, had previously stated that it’s “mind-blowing” that the U.S. government, months into the global pandemic, still hasn’t been able to improve upon its much-maligned coronavirus testing.

He placed much of the blame on long lines at commercial labs and sometimes weekslong delays in receiving test results.

There are now roughly 29.4 million confirmed cases of coronavirus worldwide, including at least 930,000 related deaths, according to the latest data from Johns Hopkins University.