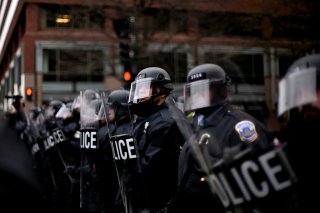 The recent protests against police brutality in dozens of cities across the country have heightened fears that a second wave of novel coronavirus infections could soon follow.

Thousands of protesters, many without protective masks, have gathered and marched in close proximity to each other. SARS-CoV-2, the virus that causes the COVID-19 disease, is chiefly transmitted via respiratory droplets that are spread when people talk, cough or sneeze.

“Crowded protests, like any large gathering of people in a close space, can help facilitate the spread of COVID-19, which is why it’s so important participants wear masks, eye protection and bring hand gel,” Saskia Popescu, an infectious-disease epidemiologist at George Mason University’s Schar School of Policy and Government, wrote in an email to The Washington Post.

In the U.S., more than 100,000 people have already died from the coronavirus, and it has been well documented that people of color have been particularly hit hard.

These protests have occurred as many states were in the process of slowly reopening businesses and public spaces after weeks of stay-at-home directives.

This past weekend, Los Angeles Mayor Eric Garcetti warned that the protests could become “super-spreader events.” In Atlanta, Mayor Keisha Lance Bottoms, advised protesters “to go get a Covid test this week.”

Some medical experts were glad to see that the protests were being held outdoors, where the virus could have a tougher time transmitting between individuals.

“There was literally a lot of running around, which means they’re exhaling more profoundly, but also passing each other very quickly.”

Other medical experts, though, were more concerned about the risk of further spread.

“Yes, the protests are outside, but they are all really close to each other, and in those cases, being outside doesn’t protect you nearly as much,” Dr. Howard Markel, a medical historian who studies pandemics, told The New York Times.

“Public gatherings are public gatherings—it doesn’t matter what you’re protesting or cheering. That’s one reason we’re not having large baseball games and may not have college football this fall.”

It appears that the vast majority of the protesting crowds are young people, who have shown to have the lowest mortality rates among those infected by COVID-19. However, there is still a risk that they could transmit the virus to older household and family members.