3.5 Million Dead: How North Korea Literally Starved to Death in the 1990s 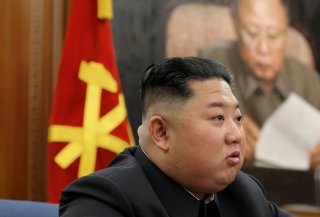 North Korea appears to be facing what could be a significant food shortage. North Korean leader Kim Jong Un recently described the country’s food situation as “tense,” the blame for which he assigned to failures in the agricultural sector owing to a strong of natural disasters last summer. North Korean state media, meanwhile, has described the current situation as representing a food crisis.

In addition to the fallout from the deadly weather events last summer, North Korea is also struggling with the ongoing effects of its strict border closures enacted to combat the COVID-19 pandemic, as well as the international sanctions regime levied against it. To address these challenges, Kim Jong Un has called on North Koreans to wage “another more difficult Arduous March,” a reference to the deadly famine that ravaged North Korea in the 1990s.

While Kim’s use of the term Arduous March may have been less of a prediction of famine and more of a general call to action, the Arduous March period remains one of the most tragic – and transformative – events in North Korean history, and serves as a reminder of the chronic food insecurity experienced by many North Koreans.

According to the North Korean government, the official cause of the famine that began in the mid-1990s was a period of major flooding in 1995. That flooding may well have been the proximate cause of the famine, but geopolitics were also at play. North Korea had likely already been experiencing a food shortage for much of the decade thanks at least in part due to the ending of massive economic assistance from the Soviet Union. A more plausible long-term explanation for the famine is the drop off of aid in combination with unsustainable farming practices and organizational problems that had characterized the DPRK’s approach to agriculture for much of the country’s existence. These issues were further compounded by an economic slowdown that impacted the agricultural sector through a decrease in the availability of necessary supplies such as fuel and spare parts for farming equipment.

As the food situation in North Korea worsened, the government in Pyongyang failed to take all the necessary steps it could have to alleviate the shortage, such as boosting food imports into the country. And while the international community was slow to recognize the full extent of the problem – likely as a result of a lack of transparency on the part of North Korea – food aid and humanitarian assistance was eventually on offer for the DPRK. Rather than use international aid as a means to properly address the famine, however, the regime in Pyongyang blocked aid from reaching some of the most vulnerable parts of the country and ended commercial food imports, treating international aid as a form of subsidized food imports.

Definitive fatality numbers have proved elusive, with some estimates varying widely. North Korea officially maintains that between 225,000 and 235,000 people died as a result of the famine, but outside estimates have suggested figures as high as 3.5 million. This high-end estimate would mean that a double-digit percentage of North Korea’s prefamine population of 22 million people perished due to the famine. More common estimates cite a casualty figure of roughly one million people, representing about 5 percent of the DPRK’s precrisis population.

The famine also produced one of the most significant socioeconomic changes in the country’s history. Prior to the famine, most food and consumer goods were distributed by the state-run Public Distribution Service (PDS). During the famine, however, the failure of the PDS to deliver necessary food and goods to North Koreans left those most heavily affected to fend for themselves, which ultimately gave rise to a number of private markets across the country. This trend has continued, and today several hundred of these markets exist.

Despite its many current challenges, conditions in North Korea may not be at famine-level just yet. Still, as the Arduous March period makes abundantly clear, such conditions can emerge quickly and without notice. Events in North Korea are such that it is even more difficult than usual to monitor the situation on the ground, and given North Korea’s food insecurity problems that predate both the COVID-19 pandemic and the deadly weather events of last year, it is important that the international community be as tuned in as possible to North Korea’s food situation.