Adapting to a Nuclear North Korea Is Better than Swapping Away U.S. Regional Assets 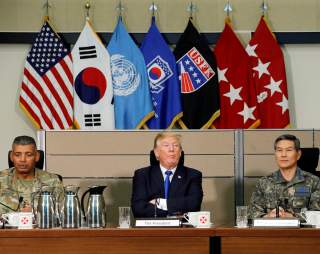 There are several possibilities of what, if any, concessions the United States might make to North Korea to achieve at least some denuclearization of that country. But since President Donald Trump began engaging North Korean supreme leader Kim Jong-un in negotiations early last year, U.S. offers have been consistently one-sided.

America has repeatedly demanded the North’s complete, verifiable, irreversible denuclearization CVID)—an extraordinary demand tantamount to unilateral disarmament. In exchange, the United States has offered vague future benefits; security guarantees, aid promises, modernization assistance, a peace treaty, diplomatic normalization and so on. This swap is lop-sided in that it expects a huge upfront concession from the North—CVID— in exchange for nothing immediately tangible. Worse, the history of U.S. behavior toward rogue states akin to North Korea, particularly toward Libya and Iran, suggests that Washington will not keep its promises.

The North will not take this trade, interpreting it as CVID for nothing. It would be great if Washington could get this, of course, but it will not happen.

Given the political resistance in Washington to “negotiating with terrorists” and “appeasement,” America has produced no better offer over time. Nor has Trump used the presidential bully pulpit to sell a painful, and therefore serious, concession to a hesitant Congress and public. The path of least resistance has been to simply repeat U.S. CVID-for-nothing demands again and again. And so, Washington has. But as the North will not accept such an obviously unbalanced deal, the talks stagnate, and nothing changes. (Although to be fair, North Korea’s offers have been similarly one-sided in its favor.)

Instead, if Washington really wants a deal with North Korea, it has two options: offer the North money—a lot—in a cash-for-nukes deal akin to the much-derided Iran deal, or remove U.S. strategic assets in the region—such as troops or aircraft—in a “counterforce” swap. If America cannot stomach either of these, then Washington will just have to adapt to the new Korean status quo of a nuclear missile-armed North Korea. These options should be ranked thusly: 1) buy the weapons (bad), 2) adapt/learn to live with the new status quo (worse), 3) trade away tangible U.S. regional strategic assets (worst).

All these options are poor of course, which is precisely why the North built these weapons, and why Washington’s default response is to pound the table and keep demanding CVID for nothing. But this is fantasy. The Kims are not stupid. Throwing money at Pyongyang has obvious downsides: it is a direct subsidy and the Kim court will absorb it all as funding for its oppressive lifestyle. Moreover, Pyongyang will launder other, ill-gotten monies. But surrendering actual physical U.S. assets in the region—soldiers, hardware, bases—is even worse than giving cash and is also worse than adapting to North Korean nuclear weapons.

Conceding strategic assets is tantamount to the partial abandonment of South Korea and, perhaps, Japan. Furthermore, it would be the “decoupling” of the alliances. Decoupling has long been assumed a major goal behind Pyongyang’s nuclear program, as well as a central reason Beijing never tried harder to stop them. After all, China would also benefit from a U.S. retrenchment from the region. Gambling for that, apparently, is worth the risk in Beijing of an unpredictable “frenemy” like North Korea nuclearizing.

Money is an easier concession because it is easily replaceable (the South Korean, Japanese, and the U.S. economies are wealthy). Additionally, cash is not politically weighted and does not require complicated logistical or physical structures. It can simply be given to the North while everything else about the U.S. position in East Asia stays the same. This is why it was an appealing choice for the Iran deal too. The politics are a lot easier.

In contrast, strategic concessions though have far greater externalities. U.S. assets in the region represent the U.S. commitment to East Asian security in a direct, tangible way, giving weight and obviousness to otherwise rhetorical U.S. commitments. Also, removing them is far more costly than simply packing some units onto a plane and “sending the boys back home.” Trump in his ignorance often talks is if it were that easy, and therefore easy to reverse.

It is not. Anything America has in East Asia which is substantial enough to swap for North Korea nukes is also large and complex enough to have required years or decades of customization to install. The legacy costs here are huge. U.S. bases in Korea, and Japan, represent elaborate, long-refined compromises between the hosts and the United States. Local communities have to be placated and helped in their adjustment to U.S. assets. Land must be bought or rented. Environmental and zoning codes must be followed. Elaborate security must be installed. Complicated legal arrangements—such as the Status of Forces Agreement or Special Measures Agreement—must be struck. Finally, arranging for the use of ground or airspace for exercising is often deeply complicated.

The list goes on, but an illustrative example is the U.S. move to Camp Humphreys in South Korea. Just coming to fruition now, this project has been talked about and underway for decades. Similarly, the U.S. withdrawal from the Clark and Subic bases in the Philippines in the 1980s demonstrates just how hard it is to reverse a withdrawal once completed, as well as a withdrawal’s possible future costs. If the United States was still deeply based in the Philippines, then China would likely not be so aggressive in the neighboring South China Sea.

In short, once Washington leaves South Korea or Japan, it will not come back. Local interests will re-assert themselves over any bases or facilities surrendered. Local communities will move on. Alliance proponents will have lost an immediate example of U.S. commitment, while opponents will enjoy changed “facts on the ground.”