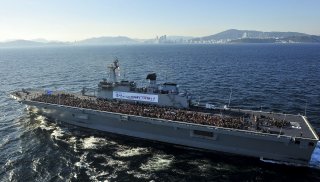 Amid rising military tensions in East Asian waters, the Republic of Korea Navy (ROKN) looks to forge a path that balances the need to respond to local threats with Seoul’s long-standing ambition to become a blue-water navy.

In the decades that followed the Korean War, South Korea’s burgeoning defense industry revolved around a singular and overriding national security concern: creating an indigenous defense force to dissuade, deter, and-- if all else fails-- defeat a second North Korean invasion. The ROKN was, in accordance with this purpose, a lean littoral navy composed largely of Chasmuri-class fast-attack patrol craft, Ulsan-class missile frigates, and Donghae/Pohang-class corvettes. Later additions to the ROKN included several waves of coastal minehunters; a legacy of the grim lessons learned from the Korean War, in which the North Korean People’s Army (KPA) successfully exploited South Korea’s lack of dedicated anti-mine capabilities to inflict massive naval casualties through the systematic use of minelayers.

Throughout the 1990’s, the ROKN sought to broaden its operational horizons from a small coastal defense force tailored to counter North Korea to a “green-water” navy capable of maintaining a credible presence in the larger Pacific region. Gwanggaeto the Great, a domestically-built destroyer class meant to phase out the increasingly obsolete US Fletcher, Gearing, and Allen M. Sumner-class vessels transferred to the ROKN throughout the 60’s and 70’s, became emblematic of Korea’s naval middle-power aspirations. These development plans were hampered by a somewhat sluggish execution during the early 2000’s, stemming from a larger strategic debate about the proper extent of Seoul’s military reliance on Washington in the face of a rising China and unresolved territorial disputes with Japan.

South Korea’s military-industrial shipbuilding capacity grew exponentially into the 2010’s, with large swathes of Korea’s naval inventory being phased out and replaced by modern variants. In particular, the littoral role previously played by Pohang corvettes and Ulsan frigates was consolidated into the Incheon-class frigate line and its block II Daegu-class revision.

These were important additions to help modernize ROK’s coastal defenses, but there was still no clear guiding vision of what the ROKN should strive to become over the coming decades. The turning point came in 2019, with South Korea’s new five-year defense plan and the accompanying introduction of an ambitious developmental roadmap entitled “Navy Vision 2045.” According to this plan, the ROKN will receive its first aircraft carrier-- the  LPX-II-- in the early 2030’s. The LPX, or “Landing Platform eXperimental,” is a light aircraft carrier being developed by Hyundai Heavy Industries (HHI). Details are scant and liable to change, but current reports suggest that the LPX-II will accommodate around 20 F-35B stovl variants. Also in the works is a 5,000-ton “Arsenal Ship”-- a mobile missile platform, derived from South Korea’s existing KDX-II destroyer design, capable of saturated cruise missile strikes against land and surface targets. Finally, the ROKN confirmed prior rumors that HHI was awarded a contract to develop the second revision of the KDX-III Sejong the Great-class destroyer, equipped with Raytheon’s advanced RIM-161 ship-based missile defense system.

Navy Vision 2045 represents the ROKN’s full-throated commitment to building a blue water force capable of running large-scale operations far away from South Korea’s shores. The existential need to ensure ROK’s littoral defenses against the DPRK continues to weigh heavily on the ROKN, but Seoul’s security establishment has shown increased flexibility in balancing the immediate North Korean threat against the long-term strategic realization that ROK cannot secure its status as an East Asian middle-power without the capacity to project naval power beyond its borders and across the Pacific.