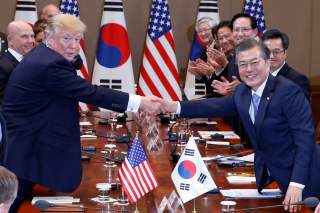 Contentious talks to renew the U.S.-South Korea military cost-sharing agreement threatens to strain an over six-decade alliance, one that advances key American interests and serves as the cornerstone of peace and security in one of the world’s most important regions.

This comes at a critical time with North Korea ramping up its conventional weapons threats to South Korea and Japan. Talks this week in Seoul ended prematurely when the U.S. cut short negotiations arguing that the South Koreas “were not responsive to our request for fair and equitable burden-sharing," while the South cited “quite a big difference in principle.”

Since 1991 the U.S. and South Korea have negotiated multiyear Special Measures Agreements (SMA) that govern how costs are shared for the 28,500 U.S. troops stationed in Korea. When the previous agreement expired at the end of 2018, talks proved so difficult that a makeshift one-year agreement was all that could be managed. Nonetheless, South Korea agreed to raise its contribution 8.2% to KRW 1.04 trillion (almost $900 million), which covers about 50% of local basing costs, a bottom-line target for the U.S. last year.

U.S. Ambassador to South Korea Harry Harris has stated that “Korea, like other allies, can and should do more.”  In one regard Ambassador Harris is right: the cost of deterring North Korea’s relentless weapons build-up continually increases the cost of common defense.

But the Korean press has reported that the U.S. “ask” is for South Korea to increase its annual contribution five-fold (to nearly $5 billion), while the South Korean Ministry of Foreign Affairs is seeking a “reasonable and equitable” increase. Closing such a large gap would be extremely challenging politically for the South.  And it is worth noting that some in Congress, such as U.S. Senator Jack Reed, a senior member of the Armed Services Committee, have praised South Korea’s contribution.

Are the U.S. demands fair or are they mercenary? And is South Korea a “free rider,” a country that scrimps on its own defense spending and overly depends on allies?  Let’s look at how South Korea measures up.

Second, South Korea is the third-largest purchaser of military goods from the U.S. –  $6.7 billion from 2008 to 2017 – and it does not seek subsidies from U.S. taxpayers for its purchases, unlike Israel and Egypt. South Korea is ramping up its defense spending to localize its defense capability and raise its military posture.

Third, South Korea shouldered around 90% of the $11 billion capital expenditure for the consolidation of U.S. bases south of the Han River to Camp Humphreys, forming America’s “largest power projection platform in the Pacific,” according to the Defense Department. And South Korea does not charge rent.

Moreover, South Korea has demonstrated that it is a dependable ally supporting U.S. military actions in Vietnam, Afghanistan and Iraq in the past and most recently agreeing to a U.S. request to send a naval destroyer to guard merchant ships in the Strait of Hormuz.

Even though the evidence shows that South Korea is not a “free rider,” does that alone justify maintaining the alliance?

Yes. Much is at stake in maintaining global order. The 66-year U.S.-South Korea alliance has kept the peace and maintained geopolitical conditions for mutual prosperity. South Korea is America’s sixth-largest trade partner and its major corporations are increasingly investing in the U.S, creating high-paying jobs for American workers. A prosperous South Korea is good for America.

It is in the interest of the U.S. and South Korea to negotiate a fair extension of the SMA that does not raise accusations among the Korean population that the U.S. is a mercenary force in their country while also addressing concerns of the U.S. that its allies shoulder as much of their own defense burden as possible. Polling shows that Korea’s highly favorable perception of the U.S. has taken a big hit. And the Korean government is hyper-sensitive to public opinion.

There is too much at stake for the U.S. to ask for too much, and thus risk alienating a responsible and reliable ally, and for South Korea to not pay its fair share given the wealth that Korea has achieved thanks to the security ensured by the U.S. military presence. Creative negotiations could strengthen, not weaken, the alliance.

At a congressional hearing in July, members of Congress expressed concern that the failure of the SMA talks could lead to the withdrawal of U.S. forces from Korea, a result China and Russia would welcome. That would probably be the death knell of the alliance.

General (Ret) Walter L. Sharp is former UNC/CFC/USFK Commander, a Director of The Korea Society and the current Chairman of the Korea Defense Veterans Association.