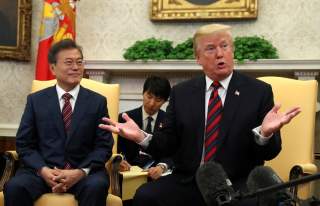 On August 24, it was announced that American secretary of state Mike Pompeo’s fourth trip to North Korea’s capital of Pyongyang would be postponed. Trump tweeted “I feel we are not making sufficient progress with respect to the denuclearization.” While this is a set partial back for North Korea, it will not change their overall strategy of playing nice to obtain sanctions relief, officially or through illegal trade. After all, Trump also tweeted that “In the meantime I would like to send my warmest regards and respect to Chairman Kim. I look forward to seeing him soon!”

Further evidence of North Korea’s diplomatic effectiveness was seen on August 13 when South Korean president Moon Jae-in declared he and North Korean leader Kim Jong-un will hold a third summit in Pyongyang in September. The agenda items include denuclearization of the Korean Peninsula and sanctions relief. Seoul hopes to push North Korea to quickly work with Washington and to completely denuclearize. Meanwhile, Pyongyang wants foreign aid and a reduction in sanctions, arguing both are needed as goodwill gestures and to help with an ongoing drought.

Kim unleashed a charm offensive during the 2018 Winter Olympics that shows no signs of stopping. He has visited South Korea twice, China three times, and may visit Russia in September. Not surprisingly, Kim is using his diplomatic visits to convince world leaders that he genuinely wants peace and that sanctions should be eased. Kim is trying to drive a wedge between the United States and its ally South Korea by claiming that America’s refusal to reduce sanctions is standing in the way of peace and disarmament. This is why Washington must consistently and coherently coordinate with Seoul on how to go forward regarding Pyongyang.

Cooperation is especially important because Kim’s plan to get closer with South Korea seems to be working. On August 15, Moon proposed that both Koreas form a single economic community by linking their railways and roads. Furthermore, Moon said this plan for an “East Asian Railroad Community” would bind together China, Mongolia, Russia, Japan, and the United States after peace is established. However, on August 31, the American-led United Nations Command—which controls the inter-Korean border—denied a request by Seoul to send a train to North Korea as part of a joint-Korean study of the North’s railroads. This highlights the rising tensions and disagreements between Washington and Seoul over how to proceed over Pyongyang.

There is also the question of how much economic cooperation Moon can push before breaking sanctions or encountering Trump’s ire. For instance, Moon also suggested on August 15 plans for joint special economic unification zones between both Koreas worth nearly $150 billion in trade. After all, South Korea is greatly interested in the economic opportunities that come with an underdeveloped North Korea, such as investment in infrastructure and cheap manufacturing labor.

But later on that same day, Washington blacklisted Chinese and Russian companies for helping Pyongyang bypass sanctions through illegal activity worth $1 billion. Additionally, a confidential United Nations report alleges Pyongyang has engaged in illegal oil and weapons sales. This time Pyongyang sold arms to Sudan, Yemen, and Libya. North Korea is also accused of violating a textile export ban to the tune of $100 million by selling clothing to China, Mexico, Turkey, Uruguay, India, Ghana, and others.

So what are America and South Korea to do? Like any good allies, they need to start by coordinating consistently and coherently. Neither ally can afford to drop any surprises on the other in the form of new North Korean summits, threats, or concessions. Washington also must not forget that all of these negotiations with Kim are also a Korean issue that deeply impacts millions of South Koreans. If America is serious about denuclearization, then it cannot dictate every detail and condition of how to proceed with negotiations and assume Seoul will always follow along.

There are many factors that could derail talks, and the “complete, verifiable, irreversible, denuclearization” (CVID) that the U.S. seeks is likely impossible. North Korea has a history of rogue behavior: a pattern of playing nice to get relief, a real invasion paranoia, a radical ideology of extreme military self-sufficiency, and a rational self-interest in survival that would motivate any country facing the U.S. to pursue nuclear capabilities. This is not to excuse the evil actions of Pyongyang’s leaders, but rather to warn that even a partial roll-back of Kim’s nuclear weapons would itself be an improbable miracle.

That is why the best America and South Korea can likely expect and aim for is perpetual deterrence and partial nuclear roll-back, with the hope that one day North Korea either transforms economically like China or collapses relatively peacefully like the Soviet Union. Any other option would likely lead to a nuclear war with North Korea or a dangerous confrontation with China.

For the time being, both Washington and Seoul need to clarify their goals, how they hope to get there, and what the acceptable alternatives are. Coordination is necessary both for success and for the alliance’s survival, as Kim is insisting on economic cooperation with South Korea and sanctions relief in exchange for what are so far only vague promises on CVID. Some goodwill gestures are called for, but America cannot let North Korea pocket concessions only to take the money and run.

But it is difficult to maintain sanctions indefinitely. The U.S. effort to get everyone onboard with the Iran Deal only to abandon it later has exhausted much of America’s credibility and political capital. Add to that Washington’s unstrategic insistence on taking on China, Russia, and its European allies through tariffs all at the same time and cooperation becomes scarcer. Furthermore, because at least 90 percent of all North Korean trade goes through China—and because Beijing fears North Korean collapse—sanctions will never be fully enforced.

Washington could always punish violators like China through increased tariffs. America could also impose a complete oil and gas embargo on North Korea when their winter approaches or use its navy to blockade and interdict illegal trade with Pyongyang. Of course, the problem of this approach would be that it would add to the humanitarian suffering in North Korea and could back North Korea into a corner that could risk a military confrontation. Finally, America needs to decide whether it is more important to force Pyongyang toward denuclearization or to contain a rising and expansionist China. Needless to say, China is more capable of destabilizing the international system than North Korea is.

When Pompeo eventually visits North Korea again, maybe he will make some progress. Or maybe not. Either way, America can deter North Korea and perhaps could even suggest a peace treaty when the time is right. That would be a low-cost goodwill gesture that doesn’t undermine the American-South Korean alliance and doesn’t decrease sanctions.

Meanwhile, it is worth exploring whether Kim would agree to a modest nuclear roll-back in exchange for limited trade and economic reforms. North Korean youths die their hair, listen to K-pop, wear blue jeans, watch Chinese soap operas, and play South Korean computer games such as Starcraft. North Koreans are daily engaged in black or grey markets, buying and selling goods either illegally or under quasi-legal conditions in which the communist party looks the other way. Hundreds of Western-style markets feature competing goods and high-end electronics demanded by North Korea’s middle class. Maybe Kim will seek an uneasy—but peaceful—co-existence based on trade and mutually-assured-destruction. Might Kim emulate China’s former-leader and reformer Deng Xiaoping by opening up to the world while also shoring up his power? Maybe.

But the fact remains that unless Washington and Seoul coordinate denuclearization, sanctions enforcement, and sanctions relief, Pyongyang will break sanctions and leave America and South Korea with nothing to show for all their efforts.

John Dale Grover is an assistant editor at The National Interest and a Young Voices contributor. He is also a fellow at Defense Priorities and his articles have appeared in The American Conservative, Fox, and Real Clear Defense. Follow him on Twitter @JohnDaleGrover.