Americans Underestimate the Danger in Continuing to Defend South Korea 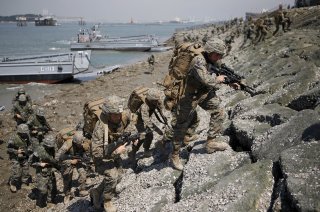 South Korea enjoys a unique status in Washington. It has generated fierce loyalty among many Americans who served there. The Republic of Korea (ROK) also enjoys widespread public support.

There is much to admire about the ROK. However, is that enough to warrant making Seoul dependent on American military defense? Americans apparently think so, even though they are uncertain about the South’s security value. After all, the alliance appears inexpensive and easy to defend. However, North Korea’s nuclear advances are sharply raising the price. American people and policymakers need to see the relationship plain to make an informed decision about future policy.

Earlier this year the Korea Economic Institute polled Americans about the Koreas. South Korea enjoyed a 61 percent favorability rating. That was down five points from last year, but only 13 percent of Americans had a negative view. The rest were uncertain.

There was less certainty that the ROK was a “critical partner,” however. Forty-four percent said yes, but fully half of Americans didn’t have an opinion. Their doubt is well-founded. Obviously, Americans have many reasons to value South Korea—significant economic, cultural, and even family ties have entwined the two peoples over the years. However, these do not constitute anything approaching a “critical partnership.”

Americans are concerned about North Korean nuclear capabilities. Three-quarters of those polled believe that getting an agreement with the North to dismantle its nuclear weapons is important or very important. Although few of those surveyed viewed the issue as the most serious foreign policy challenge facing the U.S., 68 percent said it was in the top three that Washington should address.

Addressing the nuclear issue is one thing, but it is another to act as if it is America’s problem. Despite the image of the DPRK as a crazy place and its rulers as crackpots, as in the “Team America” portrayal of Kim Jong-il, father of the current “supreme leader,” the reality is quite different.

The North issues prolific threats against countries that it perceives as a threat—South Korea, America, and Japan. Outside of that, the DPRK ignores the rest of the world. Warning China and Russia that it might turn their cities into lakes of fire would be counterproductive. But North Korea also doesn’t mention anyone else. America is on Pyongyang’s target list only because America is targeting the North.

A solid majority, 61 percent, of Americans said the U.S. and South Korea should cooperate on issues related to North Korea. An even larger majority, 69 percent, said Washington should follow Seoul’s lead in discussions with the North. Only seven percent disagreed; the rest had no opinion. Moreover, 54 percent backed agreement on partial dismantlement of the North’s arsenal, the most realistic option. Just 13 percent were opposed.

Although the United States should play a constructive, secondary diplomatic role, America’s threats of war are counterproductive. President Donald Trump traded insults with Kim Jong-Un in 2017, but only the U.S. posed a genuine threat to the other. For Kim, nuclear weapons are mainly a deterrent. They may also establish credibility with other governments, provide a tool for extortion, and maintain loyalty in the military. However, Pyongyang is not going to attack America absent what it perceives to be an existential threat from Washington.

That is more likely than some Americans might think. The United States has had the world’s most aggressive militaristic government since the end of the Cold War. Wars against Afghanistan, Iraq, and Libya led to the ouster of incumbent regimes. The reigning dictator was killed in the latter two conflicts. In Libya, Muammar Qadaffi even gave up his missile and nuclear programs in return for a promise of being reintegrated into the international order. Then the United States and Europe helped hasten his ugly demise. The clear message: Forgoing nuclear weapons is an invitation for regime change.

Yet in a 2021 survey conducted by the Chicago Council on Global Affairs, 63 percent of Americans said they supported U.S. military intervention if the North invaded the South. That is down marginally from 2017, when “fire and fury” dominated the conversation regarding the North, but up from the last two years. Is such a commitment in America’s interest?

South Korea is more than capable of dealing with North Korea’s conventional threat. The ROK has more than fifty times the GDP and twice the North’s population. It has been enhancing its armed forces and could add whatever additional capabilities were required if the U.S. stepped back. Equally important, given the impending fiscal tsunami in the United States, Washington no longer can afford to provide defense welfare to prosperous, populous allies.

Pyongyang’s nuclear arsenal adds a different level of threat to the ROK. However, that makes it even more dangerous for Washington to intervene. The United States extended several “nuclear umbrellas” for other nations throughout the Cold War, in the expectation that Washington would deter its adversaries and never be called on to fulfill its promises. Moreover, the North wasn’t even a nuclear power, so it could not retaliate in kind.

That is no longer the case. Indeed, current estimates place North Korea’s arsenal at about 60 nuclear weapons. The future looks much worse, with one forecast that Pyongyang could have 200 nuclear weapons by 2027. Are the American people prepared if Kim Jong-un or his successor responds to U.S. intervention with a threat to go nuclear against numerous cities within the United States? Would Americans be willing to risk their cities to defend the South? If so, how many?

The ROK has surmounted many challenges since it was created 73 years ago. It now is a flourishing democratic nation with a large, diverse, hi-tech economy, global business presence, and increasing cultural reach. However, if Seoul wants international influence commensurate with its other strengths, it should act the part and take over its own defense.

South Korea deserves the positive rating which Americans bestow upon it. However, that doesn’t mean that Americans also should defend the South. That is Seoul’s job. Washington may be willing to risk American cities in a conflict with North Korea, but the public likely feels differently. Washington has no good reason to follow policies that risk the destruction of the American homeland.