Biden’s North Korea Approach Would Be Predictable, but Not How He’d Respond Once Challenged 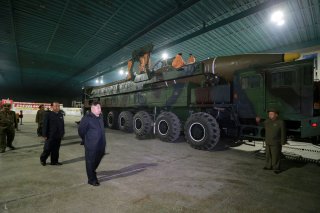 For the past two years, I’ve been confident of a Trump reelection. This truly historic year, 2020, began with the President’s impeachment having just been voted through in the House two weeks prior, though the Articles would not be formally transmitted to the Senate until two weeks into the new year. Neither then nor two weeks after that—by which time I’d digested enough early reporting about the Wuhan Coronavirus to become certain it would develop into a pandemic rightly comparable to the Spanish Flu—did a Trump reelection seem less likely than not. About a month ago, in my piece explaining why the ongoing civil violence in America will continue to escalate past Election Day and might not cease until as late as next summer, I put the odds of a Trump reelection at 80 percent or greater; I am only more confident in a Trump reelection today. Nonetheless, it’s worthwhile to consider what a Biden administration’s North Korea policy would look like.

As with many other aspects of his campaign, Biden has not comprehensively outlined what his administration’s policy, if elected, would be on North Korea. On the one hand, this is part of his campaign strategy of being a candidate who’s not Trump and otherwise remaining as formless and therefore palatable, if bland, an alternative for the electorate as he can manage, but on the other hand it doesn’t really matter that he hasn’t comprehensively outlined a North Korea policy because it would be just as one should expect it to be.

Whether you take the position that Biden is well into a phase of rapid cognitive decline and would, if elected, have about as much weight within his own administration as King Charles VI of France had during his reign or whether you take the position that a Biden administration would mean a return to the dignity, civility, and predictability of the presidency which existed as the status quo until Trump assumed the office, two things would be certain: (1) a return to power of the political establishment, what Trump would contemptuously refer to as “the deep state” and “the swamp;” and (2) a return to the approach of “strategic patience” which defined the preceding Obama administration’s North Korea policy and which Biden himself was a part of as Vice President.

Upon assuming office, a President Biden would have more on his plate domestically than he could’ve dreaded to imagine last time he was serving in the White House, but, from his perspective, what more waits on his plate abroad is hardly any better. While a President Biden may enter the Oval Office feeling somewhat relieved knowing he doesn’t plan to also proactively, much less personally, engage with North Korea as Trump did, North Korea, remarkably patient as it has been of late, will undoubtedly force itself onto Biden’s plate in short order. Perhaps it will do so through a nuclear test, perhaps through a missile test, perhaps a combination, but it will do so and soon—within twelve months, though I would expect far sooner than that.

When Trump assumed the presidency in 2017, if you can recall what feels like so long ago, the United States faced the real possibility of having to take preemptive military action against North Korea, but that was long ago and Trump’s dynamic with Kim has become a relatively known quantity. If Biden assumes the presidency in 2021, how would he react to such an escalation and the threat it would pose? What would the situation in Northeast Asia, particularly U.S.-China relations, happen to look like at that moment? How would North Korea perceive Biden as a leader and what would it expect his potential response options to be? These are important questions to consider.