The Case for a South Korean Nuclear Bomb 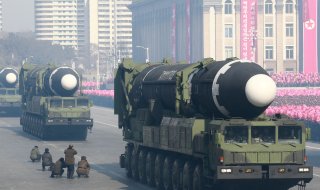 Also, given that Seoul allocates a defense budget of $46 billion to defend against North Korean threats and North Korea has spent only $642 million for its nuclear program, industrialized South Korea possesses economic and defense technological capabilities that would allow it to nuclearize for considerably less than it has spent on conventional arms. As a result, a nuclear arsenal is essential for a financially sound and efficient defense.

Another concern raised by advocates for non-proliferation is that South Korea would face counterattacks from the East Asia bloc, which geographically dominates Northeast Asia and possesses an overwhelming number of nuclear weapons. However, as nuclear confrontation puts players in a “kill or be killed” situation, the classic law of mutually-assured destruction, which has prevented nuclear war for decades, is valid in the case of South Korea. If a nuclear arsenal does not hold any strategic or tactical meaning, as idealists argue, why does the United States provide nuclear deterrence capabilities to its NATO allies and why has this prevented wars?

As everyone understands, a nuclear-armed South Korea would not use its destructive strategic weapons as a means of sending aggressive messages to intimidate the PRC or the North. Sending polished and managed messages, even to hostile neighbors, is the standard operating procedure in a normal, democratic government. Seoul is aware that Kim’s frequent nuclear blackmail and bellicose rhetoric cause blowback and that the purpose of South Korean nuclear weapons would be to hold leverage through a defensive posture. The isolation that Pyongyang has imposed on itself can happen to Seoul only if South Korea has no grand nuclear strategy, not because of justified nuclear stockpiles.

The criticism that South Korean nuclearization would justify the North’s nuclear arsenal is logically flawed. A proportional response to a first strike or an imminent threat from an opponent does not justify the first mover’s misbehavior, and such a counteraction falls under the category of self-defense. If South Korea maintained its firm stance on denuclearization and Kim respected it, then there would be no reason for Seoul to acquire nukes. Since North Korea seeks to advance its nuclear arsenal for the regime’s survival by adopting a nuclear first-use doctrine and refusing to denuclearize, it is not a reasonable choice for Seoul to stick to a one-sided denuclearization principle.

Acquiring independent nuclear weapons is a choice of last resort, and it would not be a panacea for all the problems that South Korea faces in security, diplomacy, and unification. It is also not likely that the United States would quickly tolerate Seoul’s nuclear weapons. Nevertheless, there is always a nuclear disparity between haves and have-nots, and even the strongest conventionally-armed forces can’t match nuclear weapons. Realistically, South Korean nuclearization is the best means of deterrence and security reassurance for the ROK-U.S. alliance in light of the existential threats posed by North Korea and the PRC. Seoul’s determination to nuclearize itself would address this issue and support America’s Indo-Pacific strategy.

Peace without strength is crippled. Those who criminalize South Korea’s survival instinct to build its own nuclear arsenal seem to be obsessed with the naïve and weak logic that staying as a non-nuclear free-rider that completely relies on the United States could permanently guarantee East Asian security. Doing so would only put South Korea in a more dangerous position.

Daehan Lee is a political and security affairs researcher regularly writing for Defense News and Naval News. He previously worked for the U.S. and Belgian embassies in Seoul, the People Power Party, and election camps. Lee also served as a translator for the Republic of Korea Navy. His interests are Asia-Pacific security, (non)proliferation, defense acquisition, South Korean politics, and foreign policy. Follow him on Twitter @DaehanKorea and connect on LinkedIn.