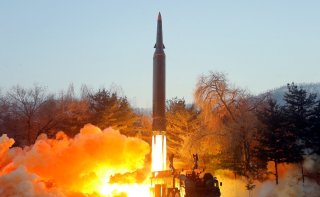 Yoon had initially made the offer, broadly summarizing it as development aid for denuclearization and peace, in his inaugural address. At a news conference discussing his first hundred days in office, Yoon repeated the proposal, although South Korean and Western experts predicted in advance that it would be regarded as a non-starter in Pyongyang.

Kim confirmed those predictions on Thursday when she declared Yoon’s idea “really simple and still childish,” claiming that North Korea’s nuclear weapons program was an integral part of its national strength and confirming that it would not “barter its destiny for corn cake.”

“It would have been more favorable for his image to shut his mouth,” she added, leading South Korean Unification Minister Kwon Young-se to condemn her remarks as “disrespectful and indecent” in the country’s parliament.

Yoon’s proposal echoes a similar proposal made by his predecessor in office, President Moon Jae-in, who made a similar offer to the North Korean leadership during a pair of summits between Kim Jong-un and former U.S. president Donald Trump. North Korea was not receptive to Moon’s offer at the time, and tensions have risen following the election of Yoon, widely perceived as a “hard-liner” on inter-Korean relations.

In her remarks, Kim also claimed that Yoon was unacceptable as a negotiator and that Pyongyang would not engage with his administration.

“We make it clear that we will not sit face to face with him,” she said.

As part of its “Juche” national ideology, which emphasizes total self-sufficiency, North Korea spends much of its government budget on weapons development. Pyongyang has insisted that the country’s nuclear capability is essential to safeguard its independence from Japan, South Korea, and the United States.

Amid rising tensions over the past year, North Korea has carried out a series of weapons tests, including the country’s first intercontinental ballistic missile (ICBM) test since 2017. Western officials have also warned that Pyongyang is also likely to conduct a nuclear weapons test in the near future.

The KCNA report declared that North Korea had fired two cruise missiles from its western coast into the Yellow Sea on Wednesday, confirming an earlier South Korean report.