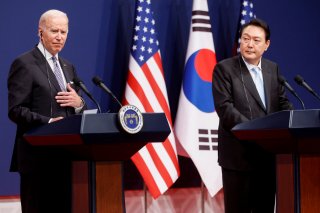 In an interview with CNN, newly elected South Korean president Yoon Suk-yeol outlined his administration’s priorities with regard to North Korea and claimed that he would pursue a hard line against Pyongyang, arguing that previous efforts to build a relationship with North Korean supreme leader Kim Jong-un had ended in failure.

“Just to escape temporarily North Korean provocation or conflict is not something we should do,” Yoon told correspondent Paula Hancocks through a translator. “This kind of approach, over the past five years, has proven to be a failure.”

Although Yoon’s remarks did not identify his predecessor by name, they were implicitly critical of President Moon Jae-in’s foreign policy, which sought to prioritize engagement with North Korea in order to de-escalate tensions between the two countries. In his interactions with Kim, Moon found an unlikely ally in President Donald Trump, who also pursued diplomacy with Pyongyang and met the North Korean supreme leader at a series of summit meetings in 2018 and 2019.

Although Moon’s and Trump’s approach earned some successes—the North and South Korean Olympic teams notably marched together in the 2018 Winter Olympics in Pyeongchang—North Korea launched dozens of ballistic missiles throughout the two leaders’ terms, released inflammatory statements about Trump and Moon, and has reportedly taken steps toward conducting another nuclear test in the coming weeks. The Trump-Moon-Kim meetings are mostly acknowledged to have failed to substantively advance ties between the North and the South.

Yoon, who defeated Moon’s chosen successor in South Korea’s presidential election in March, has characterized his predecessor’s efforts as appeasement and vowed not to repeat them. In his remarks to CNN, he announced that joint military exercises between the United States and South Korea, which the Trump administration had paused, would be resumed immediately, as it was “the basic duty of every military around the world to maintain … readiness.”

Yoon has also been critical of Chinese influence in Korea and has vowed that Seoul would join the Indo-Pacific Economic Framework (IPEF), an international bloc intended to curb the regional influence of China. Earlier in the week, Yoon indicated that his office would release a comprehensive diplomatic and security strategy for the Indo-Pacific region in the coming months, including an assessment of the prospects for coexistence with China. During his visit to Seoul earlier in the week, President Joe Biden praised Yoon’s efforts and promised that the United States would pursue closer integration with Seoul on defense issues.

Yoon has also pursued closer integration with the “Quad,” the military alliance consisting of the United States, Japan, Australia, and India.