Who Is Yoon Suk-yeol, South Korea’s Next President? 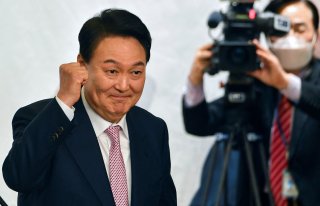 Yoon, the nominee of South Korea’s conservative People Power Party, is scheduled to succeed current President Moon Jae-in, a liberal member of the rival Democratic Party. Like Moon, Yoon is slated to serve for a single five-year term in accordance with South Korea’s constitution.

A native of Seoul and the child of two teachers, Yoon studied law at Seoul National University but faced difficulties in passing South Korea’s bar examination after making statements critical of then-dictator Chun Doo-hwan. After Chun’s fall from power, Yoon became a prosecutor in 1994. Yoon specialized in anti-corruption investigations and earned renown after his investigations led to the imprisonment of several high-profile officials and business leaders in spite of political pressure from above.

Yoon is best known within South Korea for his role as the lead investigator in a wide-ranging corruption case involving then-president Park Geun-hye, former president Lee Myung-bak, Samsung vice chairman Lee Jae-yong, and controversial religious figure Choi Soon-sil, who was alleged to have improper influence over South Korean political and business leaders. Yoon’s investigation led to both Lees being imprisoned and Park’s impeachment and removal from office on charges of abuse of power. She was later sentenced to twenty-four years in prison, although President Moon, her successor, pardoned her on compassionate grounds in late 2021.

Yoon’s success against Park and Lee led to his appointment as South Korea’s chief prosecutor in 2019. In 2020, Yoon was controversially suspended from that role over ethics violations, although a legal review found his suspension to be unjustified and overturned it in December. In March 2021, he resigned as chief prosecutor; four months later, he joined the People Power Party and launched his campaign for president.

Yoon’s most pressing foreign policy challenge is likely to be North Korea, which conducted a series of ballistic missile tests throughout 2021 and announced that it had developed a hypersonic missile in early 2022. While Moon prioritized diplomatic engagement and peaceful dialogue with North Korea, Yoon has indicated in public statements that his administration would take a stronger line against Pyongyang. In his first press conference as president-elect, he claimed that he would “build a powerful military force that can assuredly deter any provocation” from the north. He also vowed to implement “firm, principled countermeasures to North Korea’s illegal and irrational actions,” although he added that pathways to dialogue would always remain open.

As a candidate, Yoon also promised to “rebuild” Seoul’s relationship with the United States, which he described as “an alliance forged in blood” as the two nations “fought together to protect freedom against the tyranny of communism.” He has hinted that his administration could seek to install a second American-made “Terminal High Altitude Area Defense” (THAAD) anti-ballistic missile system. Doing so would likely enrage China, which briefly boycotted South Korea after the installation of the first THAAD system.