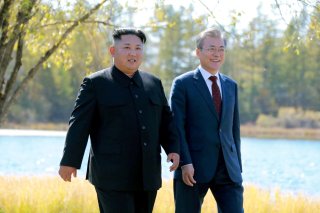 South Korean president Moon Jae-in, whose term in office is scheduled to end on Tuesday, gave his farewell address on Monday night, in which he defended his policy of engaging the North Korean government and outlined his hopes for peace, denuclearization, and the eventual reunification on the Korean Peninsula.

Moon, who was initially elected to South Korea’s presidency in 2017, is handing over power to Yoon Suk-yeol, a conservative who narrowly defeated the nominee of Moon’s Democratic Party in the country’s March 2022 presidential election. The relationship between the two men has been acrimonious in public, with Yoon accusing Moon of subservience to North Korean dictator Kim Jong-un and pledging that he would take a harder line against Pyongyang once in office.

Moon implicitly criticized these sentiments in his farewell address, urging Yoon to continue dialogue with the north.

“Peace is the condition for our survival and prosperity,” he said. “I heartily hope that efforts to resume dialogue between South and North Korea and establish denuclearization and peace will continue.”

Although Moon’s election in 2017 came during a period of unprecedented tension between North Korea and the newly-elected administration of President Donald Trump, tensions on the peninsula later calmed down, leading to a series of meetings between Trump, Moon, and Kim. Kim also sent his sister, Kim Yo-jong, to represent Pyongyang at the 2018 Winter Olympics in Pyeongchang, South Korea, where the North and South Koreans competed as a unified team in women’s ice hockey.

However, tensions resumed after 2019, leading South Korean conservatives to argue that Kim had pretended to engage with Seoul in order to buy time for further nuclear weapon and missile development.

Moon criticized this interpretation of events in his speech, claiming that “the reason we failed to move forward further wasn’t because we lacked efforts and … determination to do that. There was a barrier that we couldn’t overcome only with our determination.”

“It’s a barrier we should overcome,” the president added, although it was not immediately clear what barrier he was referring to.

As Yoon takes office, tensions between North and South Korea are running high. A recent military parade in Pyongyang showcased the North Korean military’s arsenal, including intercontinental ballistic missiles, or ICBMs. At the parade, Kim also announced that North Korea’s development of nuclear weapons would continue, and some experts have suggested that Pyongyang intends to conduct a nuclear test in the near future.