The Moon Miracle 2.0: How Moon Jae-in Can Forge A Lasting Peace on the Korean Peninsula 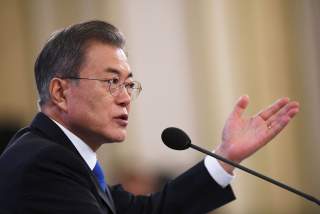 If both of us have learned anything in studying North Korea over the last decade or so it is this: Have a thick skin, a short memory and prepare to get your heart broken—a lot.

What we like to think of as the golden rule when it comes to all things “hermit kingdom” can save you a lot of heartache, emotional stress and lost hours of sleep. Yesterday’s so-called “bad news,” “failure” or quasi-threats can turn into a breakthrough right before your very eyes. All you must do is blink.

The reasons for this are obvious: America and North Korea have no real relationship to build on besides seven decades of tension combined with no sense of mutual trust that can anchor them when things have even the slightest hint of going sour. When either side feels wronged, threatened or downright disrespected, both camps run to their corners, expect the worst, and default back to hardline positions, making the entire world reread the headlines of 2017 and wonder if we are headed back to the dark days of fire and fury.

That can’t happen ever again. The good news is there is a path forward that guarantees a lasting peace regime on the Korean Peninsula, ensuring that the nuclear threats of the past remain trapped in the history books forever. Enter South Korea’s President Moon Jae-in, now preparing to head to Washington for another make-or-break summit with President Donald Trump. The Moon Miracle, or what we like to call Seoul’s smart strategy to facilitate a détente between Washington and Pyongyang, has been nothing short of a game-changer. Thanks to a historically successful Winter Olympics in South Korea, three inter-Korean Summits, a comprehensive inter-Korean military de-escalation agreement along the Demilitarized Zone, and the normalization of dialogue between the two Koreas, President Moon has done everything in his power to ensure dialogue between Washington and Pyongyang moves forward—even if that means putting his own legacy in clear jeopardy.

That is the definition of courage, but now comes the true test of Seoul’s strategy. President Moon’s task come April 11th will not be an easy one. First, he must confirm that Washington is invested in a long-term process that ensures America will commit to a concrete diplomatic negotiation with North Korea. Moon will also find out once and for all who the key decision makers and policy crafters are on Trump’s team. This won’t be easy, as hardliners such National Security Adviser John Bolton—at least in media interviews—has taken advantage of the slow pace of events to capture the North Korea issue. Bolton remains fixated on his “Libyanization” fetish, in which Kim Jong-un mimics the late Libyan leader Muammar Gaddafi in giving up the entirety of his nuclear, chemical, biological, and missile programs immediately and without reservation and without trust first being established. It will be important for Moon to know if Bolton is truly just the voice of an administration trying to project an image of strength, or whether he is truly the man driving the administration’s negotiation strategy. We both hope it’s the former, because the strategy Bolton has long been boasting about has about as much chance succeeding as the New York Mets winning the World Series this year.

From there, Moon will need to ask some hard questions. He must know if Washington is truly serious about offering absolutely zero sanctions relief until full denuclearization—something that could take a decade or more to achieve—or if there is some middle ground that could be found. We would suspect that most in the administration—besides John Bolton—would be open to at least a small compromise on this issue. By Pyongyang’s one telling, Trump himself was open to considering some sanctions relief on the North as long as the relaxation came with a snap-back mechanism in the event of backtracking. The Kim regime has been as clear as can be that it will not surrender all its weapons of mass destruction and missile delivery systems upfront with no guarantees besides America’s word. Considering Washington’s track record on leaving agreements years later it does not like, you don’t have to be a fan of the Kim regime to see why Pyongyang might not accept such a deal—it’s akin to surrender with no guarantees of regime survival. That’s a non-starter.

Here is where Moon can truly make the difference. Seoul should propose a compromise deal, whereby Washington does not need to remove sanctions, per se. The deal Seoul should pitch should look something like this: In exchange for North Korea once again agreeing to close all facilities at the Yongbyon nuclear complex—under international supervision, which would include a delegation of U.S. nuclear experts—Pyongyang would be granted a “temporary suspension of select sanctions.” This could include three UN Security Council resolutions selected by Pyongyang, as well as one to two inter-Korean economic projects. The relaxation of sanctions on specific inter-Korean economic projects, including on the linking of railways and roads across the North-South border, would cost Washington very little and be a significant boost to Moon’s separate inter-Korean reconciliation initiative—one that would only accelerate the prospects of a peace regime in the Korean Peninsula.

This play on words, or a “temporary suspension of select sanctions,” matters tremendously and could be the key to a compromise deal. Washington would be able to say that it is not dropping any sanctions at all and that its policy is not changing one bit. However, the Trump Administration can also say it will embrace the role of the reasonable adult in the room and offer the North Koreans enough flexibility to prove that its intentions towards peace and denuclearization are more than just talk. This would allow the Trump Administration to grant Pyongyang a key concession while throwing the ball on North Korea’s side of the court to demonstrate its sincerity to the process. And to ensure compliance, Washington would insist on snapback provisions in any deal, this way if the Kim regime does cheat, America and South Korea can re-apply pressure without going through the time-consuming work of passing another U.N. Security Council Resolution.

Such a formulation as depicted above not only should appeal to pragmatists like Steve Biegun, the U.S. Special Envoy for North Korea, but also to the president himself and perhaps even Secretary of State Mike Pompeo. Now freed from much of the baggage of the Mueller investigation, Trump surely would love to change the media narrative away from troubling domestic challenges and focus the American people’s collective gaze on something much more positive, especially with the 2020 elections right around the corner. There is no bigger accomplishment that would allow Trump to claim the mantle of history—and get a shot at a real legacy—then helping end the last chapters of the Cold War. But all of that requires a first step. Here’s to hoping President Moon’s visit to Washington can serve such a purpose.

Harry J. Kazianis serves as Director of Korean Studies at the Center for the National Interest. Follow him on Twitter: @Grecianformula.

Daniel R. DePetris is a columnist for the Washington Examiner and the American Conservative and a frequent contributor to the National Interest. You can follow him on Twitter: @DanDePetris.