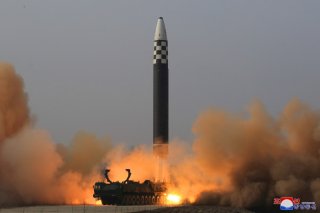 Once again, North Korea’s regime appears to have launched a ballistic missile, ahead of the upcoming change in power in South Korea.

According to the Associated Press, citing officials from South Korea and Japan, North Korea "launched a suspected ballistic missile toward its eastern waters on Wednesday." The launch came about a week after North Korea’s latest military parade, and less than a week before South Korea’s new president, Yoon Suk-yeol, takes power for a five-year term.

Per Yonhap News Agency, North Korea " fired a ballistic missile toward the East Sea," which is being tracked by South Korea’s Joint Chiefs of Staff (JCS). "Our military is tracking and monitoring related movements and maintaining a readiness posture," the JCS told reporters Wednesday. Yonhap and the AP both called the launch the fourteenth "show of force" by the North Koreans this year, with the most recent launch before this one taking place on April 16.

A Yonhap report earlier that day had quoted the U.S. ambassador to the UN Linda Thomas-Greenfield as stating that the United States planned to push a U.N. Security Council (UNSC) resolution condemning North Korea’s recent missile launches. "We do have a resolution that is being discussed in the council on DPRK, and it is our plan to move forward with that resolution during this month," the ambassador said. "We are very concerned about the situation there, the numerous violations of Security Council resolutions that the DPRK has engaged in."

This is expected to happen now that the U.S. has assumed the temporary presidency of the UN Security Council. "It is our hope that we can keep the (Security) Council unified in condemning those actions by the DPRK," the ambassador said, per Yonhap.

At that military parade late last month, North Korea showed off its latest weapons, per the AP. The parade, which was held at night, was timed to coincide with the ninetieth anniversary of North Korea’s Army. North Korean leader Kim Jong Un also spoke at the parade, during which he "vowed to accelerate the development of nuclear weapons and threatened to use them if provoked."

"[We] will continue to take measures for further developing the nuclear forces of our state at the fastest possible speed," Kim said at the parade, which was broadcast on state television a couple of days later. "The fundamental mission of our nuclear forces is to deter a war, but our nukes can never be confined to the single mission of war deterrent even at a time when a situation we are not desirous of at all is created on this land," Kim reportedly said.