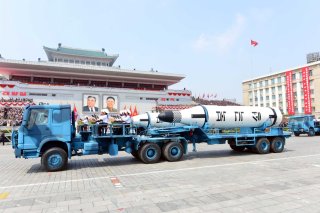 Following weeks of rumors, the North Korean regime is holding a military parade in Pyongyang, the Yonhap News Agency reported Monday. The parade is meant to mark the ninetieth anniversary of the founding of the North Korean People's Revolutionary Army (KPRA).

Citing a South Korean military source, Reuters confirmed the report. Reuters added that the parade began after dark, which has been the case with North Korea’s last three military parades. This is the tenth time the regime has held a military parade during the tenure of Kim Jong-un, although none of the previous parades were held on that particular anniversary.

Yonhap had reported the day before that South Korea believed a parade was likely. Like most such parades in North Korea, the purpose was to showcase the regime’s most cutting-edge weapons. “During rehearsals, over 250 pieces of military equipment have been paraded, including a hypersonic Hwasong-8 missile, a Hwasong-17 intercontinental ballistic missile (ICBM), and a submarine-launched ballistic missile (SLBM),” the report said.

Earlier on Monday, NK News reported that a parade was “likely imminent,” as Kim Il Sung Square was reportedly “busy” and nearby roads were closed, while people were seen walking toward the location. The site also reported over the weekend that Air Koryo planes were flying across the country, likely preparing for such a parade. “One of the largest planes in national carrier Air Koryo’s fleet, an Ilyushin-62, showed up in the northeastern city of Samjiyon in a Planet Labs satellite image taken on Saturday morning, around the same time one was missing from the Pyongyang International Airport where it is typically parked,” NK News wrote.

Prior to this week, the last North Korean military parade was held in September, which marked the seventy-third anniversary of the regime’s founding. This was around the time Kim Jong-un appeared in public looking notably slimmer than he had the last time he had appeared in public, leading to widespread speculation about his health.

A Daily NK report last week said that many had expected a parade on April 15—Kim Il-Sung’s birthday—indicating that the parade had been delayed from its originally planned date.  “From the time North Korean authorities started recruiting soldiers to participate in the parade in June of last year, they made it clear that the event would mark Kim Il Sung’s birthday, a holiday North Koreans call the Day of the Sun,” the report said. “Not only did the headquarters preparing the parade believe until recently that the parade would be held on Apr. 15, but so did the military units supporting the parade.”