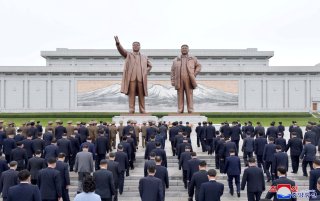 Over the last decade, the seemingly callow and inexperienced Kim demonstrated a killer instinct, eliminating his personal rivals and taking firm control of the world’s only communist monarchy. From that position, he pushed the Democratic People’s Republic of Korea (DPRK) to develop nuclear weapons and an increasingly sophisticated missile arsenal.

February 16 was the Day of the Shining Star, the eightieth birthday of Kim pere, for which “the largest-ever celebratory events” were planned. With his tenure marked by a deadly famine, this Kim may be the least popular of the three Kims who have ascended the DPRK’s ideological throne. However, the celebration was grand, capped by a meeting of the Workers’ Party of Korea, which Kim fils attended. The government news service explained: “The meeting showed well the firm will and enthusiasm of the participants to ... build a people's paradise prospering with self-reliance on this land.”

However, this was but a prelude to even greater festivities. Reported the Daily NK: “the Central Committee issued the order to make Feb. 16 to Apr. 15 the ‘greatest celebratory period of the nation, embodying the passion of the party, military and people.’” The latter date is even more significant: The Day of the Sun is the birthday of regime founder Kim Il-sung, Great Leader and eternal president (as well as of a few other of us mere mortals honored to share the day with him).

The last time North Koreans celebrated similarly was three decades ago. It turns out that “This is the first time since 1992 that the authorities have ordered around two months of celebrations. That year, Kim Il Sung celebrated his 80th birthday while Kim Jong Il marked his 50th, and it was also the 100th anniversary of the founding of the Korean People’s Army. Nineteen-ninety two was, like this year, chock full of anniversaries of multiples of ten, anniversary years that North Korea takes seriously.”

Preparations are evident for a large military parade Friday. People are practicing manipulating their synchronized cue cards, suggesting the inclusion of choreography reminiscent of the famed mass games. And, most importantly, a significant military test seems likely. Sung Kim, the U.S. special representative for North Korea Policy, warned: “I don't want to speculate too much, but I think it could be another missile launch. It could be a nuclear test.”

Although nothing is certain in the DPRK, one or the other is a good bet.

First, an exhibition of military prowess is Pyongyang’s preferred method of celebration at home and demonstration abroad. Though common these days, missile tests still command Seoul, Tokyo, and Washington’s attention. Long-range shots are especially likely to trigger a US reaction. A nuclear test, which would be the first since 2017, would be particularly noteworthy—and possible because China would likely tolerate such an event out of antagonism toward the United States.

Second, celebrating the past helps the regime strengthen the present. Noted the Daily NK: “All this suggests that the authorities have ordered officials to make active use of the period to emphasize the legitimacy of the current leader, even as they highlight the accomplishments of his predecessors while marking their birthdays.” Honoring the dynasty’s accomplishments indirectly burnishes Kim’s record and increases his stature.

Third, given the military’s central role in the North Korean system, a missile or nuclear test would showcase generational continuity. The North’s missile and nuclear programs began under grand-pere Kim Il-sung and were advanced under Kim pere. Kim Jong-un greatly accelerated both weapons’ development. He is doing so as part of a broad arms buildup, which will yield a military with weapons far more sophisticated than any other nation of the DPRK’s relative stature. Perhaps most significantly, he is closing in on the production of nuclear weapons and missiles capable of targeting the U.S. homeland. In just a few years, Kim could have amassed an arsenal that places his nation ahead of Israel and firmly within the second rank of nuclear powers, including India, Pakistan, France, and the United Kingdom.

Yet the Day of the Sun is not the last April day likely to be celebrated. April 25 will mark the hundred-and-thirtieth anniversary of the founding of the KPA.

Kim will emerge from this process with all the legitimacy that his unique political system can bestow. However, he also knows the tenuousness with which power can be held even by the Kims. For instance, his father’s path to power required sidelining an uncle who had held the pole power position. Then Kim Jong-il had to deflect the claims of a younger half-brother; after taking power, Kim pere sent his rival into pleasant exile as a permanent ambassador on station in Eastern Europe.

Kim Jong-un ended up the heir to his father at least in part because an older half-brother, Kim Jong-nam, embarrassed the regime, using a forged passport on an unauthorized trip to Japan, only to be discovered and deported back to the DPRK. Kim Jong-un had this potential rival assassinated in 2017. This development was especially troubling since he was living under Chinese protection in Macau. Another apparent family foe was Kim’s uncle, Jang Song-thaek, who was charged with being a Chinese agent and executed by Kim fils barely two years after the latter took power.

Today, despite the latest celebrations, the security of Kim’s regime, both the dynasty and larger political system, is a good deal less certain than his titles and celebrations suggest. The DPRK’s economic difficulties are evident to all. Kim must deal with the ravages of socialism, the pain of U.S. and United Nations sanctions, and the consequences of sealing the country off to control the coronavirus pandemic.

A few years ago—it seems like a lifetime ago—Kim declared that military deterrence had been achieved, and he planned to concentrate on improving the people’s livelihoods. That promise has since faded. Since the collapse of the 2019 Hanoi summit, he has been warning his people of tough times ahead. As part of his effort to ensure firm party control, Kim has even been retreating from earlier economic reforms, suggesting he expects continued austerity and isolation.

Perhaps even more threatening to the Kim dynasty’s long-term survival is the contagion of South Korea and foreign culture. Early during his tenure, he showcased Disney figures, and as late as 2017, he and his wife hosted a K-pop concert. However, Pyongyang has increasingly cracked down on access to external information, already sharply limited by the Covid-19 policy. This attempt to isolate the regime from outside circumstances may succeed as long as the border remains closed—though even the DPRK cannot erase people’s memories—but will come under significant pressure once outside contacts resume.

Finally, Beijing’s friendship with North Korea remains, at best, conditional. After the North’s last nuclear test in September 2017, China leaned Washington’s way, criticizing Pyongyang. Indeed, the People’s Republic of China backed and enforced numerous sanctions to punish the DPRK for its missile and nuclear tests. Chinese relations with the United States have since tanked, leaving Beijing willing to sacrifice its own interests to punish America.

Improvement in the U.S.-PRC relationship is possible, however, despite ongoing tensions. If so, Pyongyang might again find itself constrained by the PRC’s opposition to the North’s missile and nuclear programs, which might not always be targeted south. Even worse, Beijing might look for ways to intervene in North Korean politics, fulfilling Kim’s apparent fears in ordering the murder of Kim Jong-nam.

This year, the Day of the Sun might seem to blaze brightly for Kim Jong-un, the North’s supreme leader. However, clouds are evident afar, and neither the dynasty nor the regime can predict the future. Kim’s steady military build-up offers security from some dangers but creates others. Today could prove the calm before the North Korean storm.